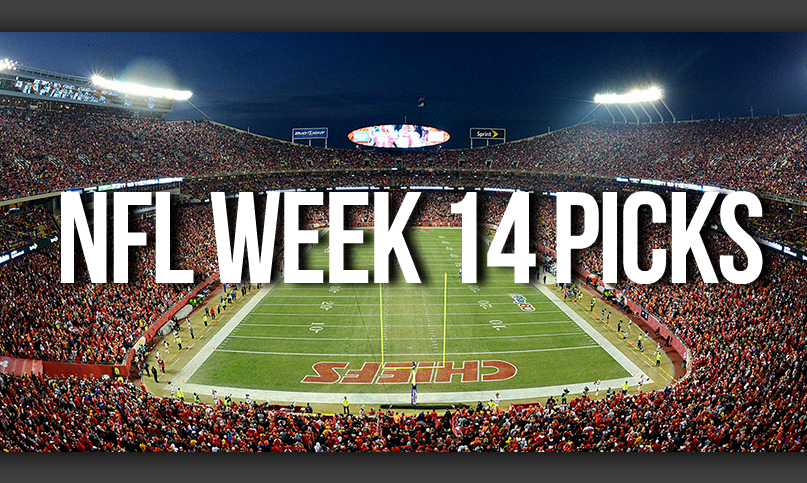 NFL week 14 Picks and Previews for every game.

The Philadelphia Eagles were the NFL’s premier team at the beginning of week 13. However, a 24-10 loss to Seattle Seahawks now has Philadelphia trailing the New England Patriot as the NFL’s best team. Can the Eagles get back to winning ways in the NFL week 14 picks?.

Four teams have been eliminated from the playoff already: Cleveland Browns, San Francisco 49ers, New York Giants and Chicago Bears. Theoretically, everyone else is in the hunt for the playoffs, and week 14 is now or never for those on the outside looking in.

This is a huge Thursday night game that will have playoff implications. New Orleans Saints won a big NFC South game against Carolina Panthers last weekend, 31-21. Drew Brees threw for one touchdown while running backs Mark Ingram and Alvin Kamara combined for 145 yards and three touchdowns on 23 carries. The Saints have it going on at 9-3. Making things more difficult for the Atlanta Falcons is the fact the Saints are 2-0 against the NFC South.

Indianapolis Colts fell to defeat for the third straight game last weekend. The Colts now prop up the AFC South. Buffalo Bills didn’t have a good week 13 either as New England hammered them 23-3. The Colts season is over for all intents and purposes. The Bills still have shot at the playoffs. Currently 6-6, Buffalo has to come alive and win out to hope it can earn a playoff spot.

The Dallas Cowboys gave themselves a lifeline by defeating archrivals Washington Redskins in week 13, 38-14. Dallas has an outside shot at making the playoffs, but at 6-6, the team must win its final four games to have a real chance at the postseason. Dak Prescott has been poor without Ezekiel Elliot in the lineup, but last weekend he threw his first touchdown pass in four weeks. The Giants lost to the Oakland Raiders in week 13 and fired coach Ben McAdoo the following day. It was called a long overdue move. Geno Smith did look promising at quarterback against the Raiders. He threw for 212 yards and one touchdown.

Detroit’s playoff hopes have imploded in the last two NFL weeks. Meanwhile, Tampa Bay never really looked like a team that would contend for a postseason spot. Both teams have lost two straight games, but the good news for Detroit is the team are 4-2 on the road. A win would be huge for the Lions in NFL week 14 picks.

Everyone wants to talk about the great season New England and Philadelphia are having, but what about the collapse of the Kansas City Chiefs?. The team was 6-2, but after four straight losses, are now .500. The team is still somehow hanging onto first in the AFC West thanks to Kansas City’s 5-0 start. Three teams in the West are 6-6, and it could be the most exciting playoff race in the NFL.

San Francisco 49ers recorded a much-needed win over Chicago Bears last weekend. Quarterback Jimmy Garoppolo got his first start and threw for 293 yards and one interception. Houston Texans are out of the playoffs despite being mathematically still in them. The 49ers are good value to get their second straight win this weekend for the NFL week 14 picks .

Can the Green Bay win out and make the NFL Playoffs?. That is the question circulating around the NFC. The team has had it rough since losing Aaron Rodgers to a collarbone injury. But the Packers starting quarterback is on the mend. He could return for the team’s December 17th game against Carolina Panthers. Some believe Rodgers should sit out the rest of the season, but the Packers want him back to push for a wild card spot in the NFC. Cleveland Browns, on the other hand, are the Cleveland Browns.

Cincinnati Bengals finally had their archrivals, the Pittsburgh Steelers, right were they wanted them. However, the Bengals blew a 10-point fourth quarter lead, and lost 23-20 on Monday night. The team is now expected to fire head coach Marvin Lewis at the end of the season. He has been in Cincinnati since 2003. Chicago Bears are also expected to make a coaching change as John Fox is set for his third straight losing season with the team. Sunday’s game may not be pretty.

Minnesota Vikings head to Carolina to face the Panthers in this huge NFC game. The Panthers occupy one of the wild card places currently. However, a loss to Minnesota and the team could fall out of a playoff spot depending on the other games in the conference. Minnesota quarterback Case Keenum continues to roll. He threw two touchdowns in week 13 against Atlanta. Carolina signal caller Cam Newtown was solid in the Panthers’ loss to New Orleans, but he needs the rest of his team to step up, if it wants to make the postseason.

Life just keeps getting sweeter for the Los Angeles Chargers. Tied for first in the AFC West, the Bolts face Washington Redskins in NFL week 14. Philip Rivers is playing great football. He has tossed 21 touchdowns for 3,292 yards this season. San Diego has won three straight games, and could be in a two-way tie for first place in the AFC West after this weekend. The City of Angels could have two NFL teams in the playoffs this season.

A loss this weekend and the Denver Broncos will be officially out of playoff contention. Meanwhile, the New York Jets are looking to finish the season on a high note, and could end over .500. Last weekend’s win over the Chiefs was unexpected as the Jets showed a fighting spirit that had been missing for several weeks. Broncos general manager John Elway has stated he is embarrassed with Denver’s season, and a clear out of the coaching staff is expected in the offseason.

Tennesse Titans are 8-4 and tied for the top of the AFC South. The team travels to Arizona on Sunday. The Titans are only 3-3 on the road, and could fall victim to an upset. The Cardinals have had a few bad breaks this season, especially the injury to Carson Palmer, who hasn’t played since October 22. The Cardinals Blaine Gabbert threw for 221 yards in the team’s week 13 loss to the Los Angeles Rams. He will start against Tennesse as he auditions to be the team’s starter in the future. It could be an upset for the NFL week 14 picks.

The Los Angeles Rams will once again be put to the test. The last time the Rams faced a major challenge, the team lost to the Minnesota Vikings. If the Eagles defense can keep Rams quarterback Jared Goff at bay, then Philadelphia should come away with a win. Carson Wentz and the Eagles offense need to be on the field for large parts of the game. Against Minnesota, the Rams only had 22 minutes of possession, while the Vikings had 37. If Philadelphia has the ball longer, the Eagles win.

This is a battle of two 8-4 teams that both currently occupy wild card spots in their respective conferences. Seattle Seahawks quarterback Russell Wilson was big in the team’s win over the Eagles. He threw for 227 yards and three touchdowns. Jacksonville quarterback Blake Bortles also had a great week 13. He tossed two touchdowns and threw for 309 yards. There isn’t a lot to split the teams, but Jacksonville has the edge with its home fans behind it.

A classic AFC North battle will take place in Pittsburgh as the Baltimore Ravens come to town. Baltimore dominated Detroit last weekend, but nearly got a scare as the Lions made a short-lived second half comeback. Which Ravens team is going to show up against the Steelers?. Will it be the defensively sound team that keeps a shut out or will it be the team Pittsburgh pushed aside, 26-9, in October?. The Steelers cannot afford to fall behind Baltimore like they did Cincinnati on Monday night. The Ravens defense is far better than the Bengals, and will hold onto a lead.

The Miami Dolphins finally got a win in week 13. When you need a big performance, just play the Denver Broncos. Miami scored 35 points, the most the team’s offense has scored in a single game all year. Unfortunately, New England and Tom Brady visit Miami in NFL week 14. The Patriots just defeated Miami two weeks ago. The Pats are 6-0 on the road, and will make it a perfect seven on Monday night.