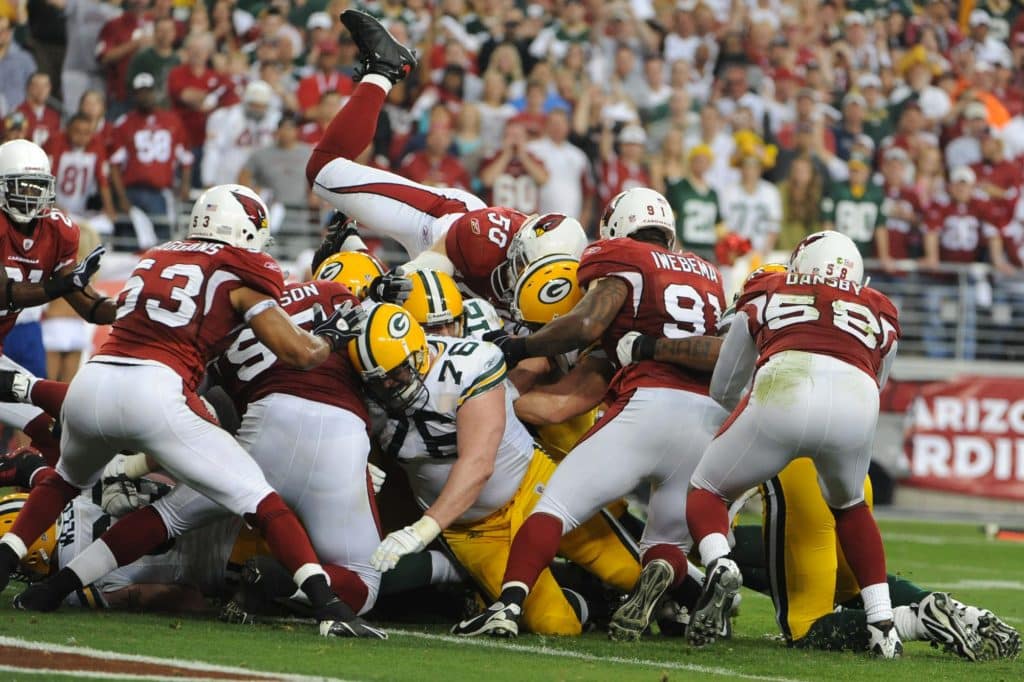 The NFL has some seriously well-paid players in it and that's not surprising.

The NFL is one of the world's most watched sports and every week, millions of people tune in across the globe to watch their favourite players and teams battle it out on the field.

But who are the current 20 highest paid Quarterbacks in NFL right now?.

Below we've put together a list of the 20 highest paid quarterbacks in NFL at the moment. These are the real superstars and they've got a wage to match. 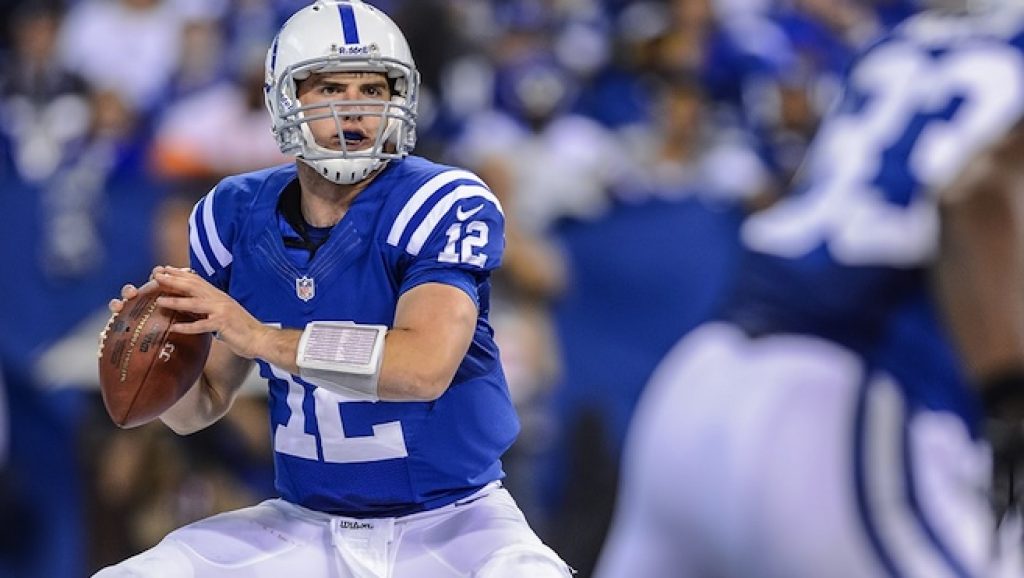 At the tender age of 26, Andrew Luck holds the auspicious title of the best-paid player in the NFL.

His college football days were spent at Stanford after which he was drafted by the Indiana Colts as their starting quarterback.

His career highlights include winning the Maxwell Award as well as the Walter Camp Player of the year award in his college football days.

He also saw the Colts through to three consecutive playoffs between 2012-2015.

Joe Flacco played the majority his college football for Delaware after transferring from Pittsburgh.

While playing for Delaware Flacco managed to set 20 school records as well as being named the most accurate QB of 2007.

Despite being uncertain of his future in the NFL, even asking his coach to let him play baseball at Delaware, Flacco was eventually drafted 18th overall by the Baltimore Ravens, making him the highest ever draft pick from the University of Delaware.

During his time at the Baltimore Ravens, Flacco has received universal praise and became the first QB in NFL history to win playoff games in five consecutive years. 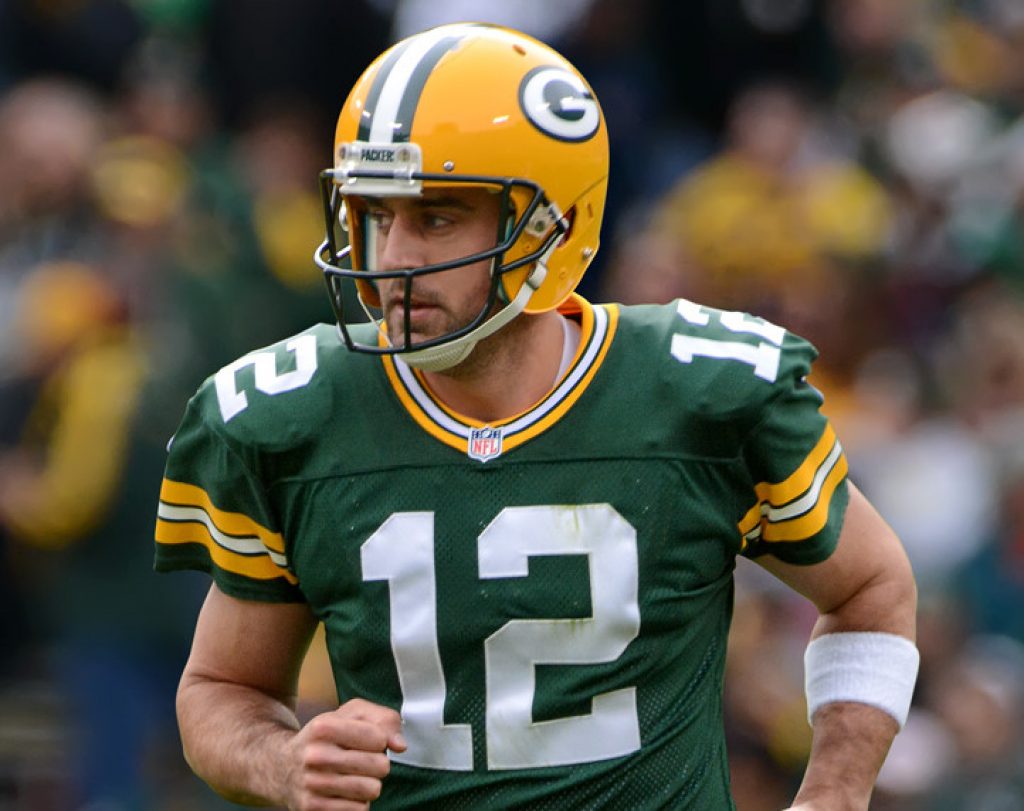 Aaron Rodgers began and ended his college football career at California University and was drafted 24th overall in the 2005 NFL draft by the Packers.

For the first three years of his NFL career as backup QB for the legendary, Brett Favre.

In 2008, Rodgers took up starting QB responsibilities and has remained in that position since.

In his first year as starting QB, Rodgers saw the Greenbay Packers through to winning the Super Bowl and was named Superbowl MVP of that year.

Wilson played his college football for the University of Wisconsin in 2011 where he set an FBS record for passing efficiency.

After his time at Wisconsin, Wilson was drafted by the Seattle Seahawks with their 12th pick.

being drafted so low, he went on to match Peyton Mannings rookie record for most passing touchdowns and was named Pepsi NFL Rookie of the Year.

Ben played his college football at Miami University before being drafted by the Pittsburgh Steelers, 11th overall, in the 2004 draft.

Since then he's gone on to become one of the most efficient and effective players in NFL history.

He's currently 6th all-time in yards per attempt, 9th in terms of passer rating and 10th for completion percentage.

The Mannings are a football dynasty and Eli Manning is no exception. In his college career, he played for the University of Mississipi before being drafted first overall by the San Diego Chargers in the 2004 draft.

After being drafted he was immediately traded up to the New York Giants for a package and has remained there since.

He currently holds the franchise records for completed passes, touchdown passes and most passing yards.[/su_note]

Phillip Rivers played college football for North Carolina State University and was drafted 4th overall by the New York Giants in the 2004 draft.

He was the opposite trade to Eli Manning above and moved to the San Diego Chargers as part of the transfer package.

While at the Chargers, Rivers lead them to a 14-2 record in the 2005 season after Drew Brees left for the Saints.

Cam Newton played college football for Auburn before being drafted first overall pick for the Carolina Panthers in 2011. In his rookie season, Newton broke the NFL rookie records for rushing and passing yards and was also the first NFL rookie to throw 400 yards in his first game.

Matt Ryan started his career playing football for Boston College before being drafted by the Atlanta Falcons with the third overall pick in the 2011 draft.

At the Falcons he has failed to lead the team beyond the regional playoffs, missing out to the Greenbay Packers in 2011 who went on to become Super Bowl champions that year.

Drew Brees played college football at Purdue and won multiple awards before being drafted in 2001 by the San Diego Chargers.

Brees suffered an injury while at the Chargers which kept him out of the game for some time before he eventually signed with the Saints in 2006 as a free agent.

Since then he's lead the team to their first ever Super Bowl in 2010 against the Colts and nabbed numerous personal and franchise bests.

Kirk played his college football at Michigan State where he was starting QB between 2009-2011. He was then drafted by the Washington Redskins in the fourth round of the 2012 draft.

Cousins has had a rocky career at the Redskins and has made it clear on numerous occasions that he's open to a trade. Despite being drafted in 2012, he didn't see his first full season has starting QB until 2015.

Tannehill played his college football at Texas A&M where he fought hard for his position as quarterback. For the first three years, he was beaten out for the position, being played instead as a receive.

But, managed to work his way there in 2011 when he started all 13 games. He was drafted by the Miami Dolphins in the 2012 draft.

Colin Kaepernick played college football at Nevada before being drafted by the San Francisco '49ers in 2011. At Nevada, he was named MVP of the humanitarian bowl in 2008 and twice named as the Western Athletic Player of the year.

In the 2012 season, Kaepernick filled in for an injured Alex Smith and saw the '49ers to their second Super Bowl playoffs in as many years.

Jay Cutler began playing college football at Vanderbilt in 2002 where he set records for rushing yards and touchdowns. In 2006 he was drafted by the Denver Broncos before moving in 2009 to the Chicago Bears.

Brock played college football out of Arizona State University and was drafted by the Broncos in 2012. While at the Broncos, Brock won the Superbowl over the Carolina Panthers.

This year he moved to the Houston Texans where he signed a four-year, $72 Million contract.

Tony Romo played college football at Eastern Illinois University and won the Walter Payton award 2002 as well as leading the team to an Ohio Valley Conference Championship in 2001.

While not selected for the 2003 draft, Romo joined the cowboys as a free agent. He played the 2003-2006 season as backup QB but started seeing regular duties as starting QB from 2006 onwards.

Stafford played college football for Georgia before being drafted by the Detroit Lions, first overall, in the 2009 draft.

In his career at the Lions, Stafford has been named as the fastest ever player to reach 25,000 passing yards as well as being the fourth player in NFL history to throw over 5,000 yards in a single season.

Bradford played college football for Oklahoma and as a redshirt sophomore, he became the second ever sophomore to win the Heisman Trophy.

He was drafted first overall in 2010 by the St Louis Rams, before moving first to the Eagles in 2015 and now to the Minnesota Vikings for the 2016 season.

Smith started out playing college football for the University of Utah. While there he was named Mountain West Conference Player of the Year 2004 and lead the team to a top five, national finish.

In 2005 he was drafted by the San Francisco '49ers first overall. He remained in San Francisco until 2012 when he was traded to the Kansas City Chiefs.

Last, but by no means least, we have Carson Palmer. Palmer played college football for USC where he won the Heisman Trophy.

He was then drafted, first overall, by the Cincinnati Bengals in 2003. He remained at the Bengals for seven years before transferring first, to the Oakland Raiders for 2011-2012 and then to the Arizona Cardinals in 2013.

So there we have it – the 20 highest paid Quarterbacks in NFL playing right now. I'm sure you'll agree it makes interesting reading.

We will be running a series of Top lists in the NFL so be sure to read are other articles that reveal a few surprises.