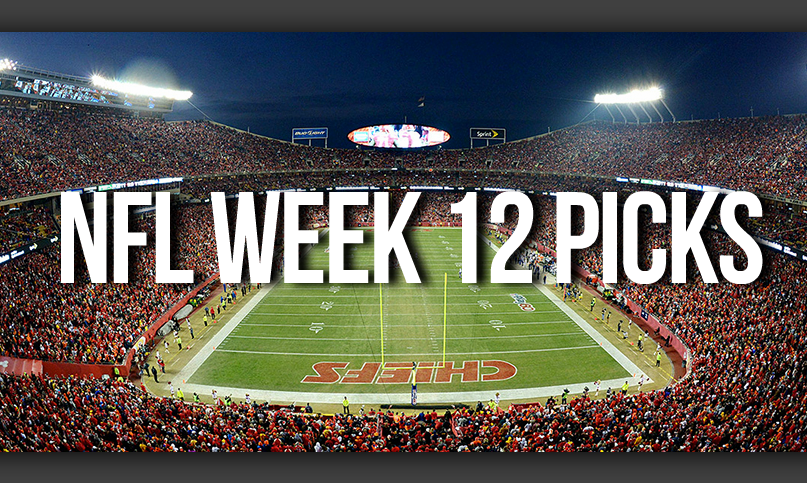 NFL week 12 picks provides a massive football feast thanks to the Thanksgiving holiday. Sixteen potential playoff deciding games will be played between the 23rd and the 27th. NFL fans can enjoy an incredible week of action as all 32 teams will play during NFL week 12.

The Vikings ended the Rams winning streak in week 11. The team is strong and Case Keenum is doing enough to get the team wins week after week. Detroit has been winning as well. The Lions have won their last three games and a win against their NFC Central rivals could put them in position to win the division. Unfortunately, Detroit is under .500 on Thanksgiving Day. It is NFL tradition for the Lions to play at home on the holiday, but don't expect them to come away with the ‘W'.

The Cowboys are hurting without Ezekiel Elliot. Dallas has lost two straight games and possess a .500 record. The Chargers have suddenly come alive and with the decline of the Kansas City Chiefs, the Chargers have played their way into being the AFC West's potential winners. The Chargers put 54 points on the Buffalo Bills in week 11, and the team won't be afraid of the Cowboys in Big D.

Break up the New York Giants! Okay, maybe not, but the team is, er, hot? New York defeated the once unbeatable Chiefs in week 11 and Eli Manning had a solid game. He didn't throw any touchdowns, but he didn't throw a pick either. He also managed to pass for 205 yards. Against their NFC rivals Washington, don't expect the Giants to continue their winning streak. Washington may have lost two straight, but the team is far better than the Giants. A three-point loss to the New Orleans Saints in week 11 wasn't a bad result. A win would have just been better for the Redskins.

This is a matchup of two teams with little going right for them currently. Buffalo gave up 54 points to the Chargers last week. The Bills have given up 135 points in three games, and the run defense is atrocious. For no reason whatsoever, the Bills benched starting quarterback Tyrod Taylor in week 11 for rookie Nathan Peterman. The rookie threw five interceptions before being removed from the game. He threw five picks on 14 passing attempts. The Chiefs have been bad, but not that bad.

The Titans are on the bubble. Will they make the playoffs or won't they? The team lost big to Pittsburgh in week 11, but the Titans play a bad Colts team this weekend. Although the Titans look likely of getting a playoff spot, the team looked bad, especially with quarterback Marcus Mariota throwing four interceptions. Indianapolis is in a holding pattern until quarterback Andrew Luck comes back. So, anything the team achieves this year will be forgotten when Luck returns.

It's the battle of Ohio as the hapless Browns travel south to Cincinnati. The bad news is, the Bengals would have to win their remaining games to make the playoffs. But the good news is, Marvin Lewis' team looked good against the Broncos last week. Well, at least the passing game and defense did. The run game is still nonexistent. On the other hand, the Browns are just the Browns. Could they go 0-16?

Both teams have won two straight, so something has got to give in Atlanta. The Falcons haven't been great in their new Mercedes Benz Stadium, but the Bucs have been worse on the road. Matt Ryan threw two touchdowns as the Falcons overcame the Seahawks last week. Atlanta is poised for a big run. The team was 6-4 after 10 games in 2016 and Atlanta made the Super Bowl. Watch out for the Falcons.

Once a promising team, the Miami Dolphins have lost four consecutive games. New England is the opposite and Tom Brady has righted the ship after a bad start. Since starting the season 2-2, the Patriots defense has greatly improved. The defense has allowed just 12.5 points per game since week 5.

The Eagles keep winning and Carson Wentz continues to throw touchdown passes. If he isn't the MVP vote leader currently, then there is a problem with the system. The Bears, on the other hand, are losers of three straight. The team is 1-3 on the road, and Philadelphia will be hungry to defeat Chicago and become the first 10-win team in 2017.

Carolina is having a fantastic season. The only problem is the New Orleans Saints are having an even better season in the NFC South. At 4-1 on the road, Cam Newton will have plenty of confidence taking his team into New York to face the Jets. Newton three four touchdown passes in week 10, which was the last time the Panthers played. The Jets are also coming off of a bye. But the biggest difference is, they just aren't as good as Carolina. According to ESPN, the Jets had the lowest odds of making the playoffs in the NFL when the season began.

It's a showdown of NFC West rivals as Seattle heads south to San Francisco. Seattle's defense is banged up, and the secondary could be vulnerable against the 49ers. In addition, the kicking game isn't great, and Blair Walsh has missed five of his last eight field goal attempts. San Francisco still hasn't played Jimmy Garoppolo. Surely fans are getting antsy. But there is little reason to throw him on to the field with a 1-9 team. Saving him for next season could be the team's answer to all its problems. San Francisco fans will get to see a truly great NFL quarterback in Russell Wilson this weekend. He is the reason the Seahawks can win every single Sunday.

The once invincible Rams were proven to be mortals against the Vikings in week 11. The high-octane Rams offense only scored one touchdown. Things don't get any easier for Jared Goff in NFL week 12. The Saints visit LA, and Drew Brees continues to add to his Hall of Fame career stats. Down 24-13 going into the fourth quarter against the Redskins, Brees led the Saints back to an eventual overtime win. The defense will need to play better against the Rams, however, for a win in Tinsel Town.

Jacksonville has record its most wins in a season since 2010. Currently leading the AFC South, Jacksonville has the inside track to win the division. At 4-1 on the road, going into Arizona shouldn't be too much of a challenge. Injuries have hurt the Cardinals all season. Arizona is .500 at home, and without Carson Palmer under center, the team looks leaderless.

It's an AFC West showdown between two sides going nowhere. The Broncos have lost six straight games. The Raiders do have the potential to win the division, but the team must win in NFL week 12 to get on the right track. After playing Denver, the Raiders will play six games, and could, theoretically, win five of those. If they can, then the playoffs are a legitimate possibility.

Just when you think the Packers could make a run at the top of the NFC Central, the team loses. It wasn't just a loss, but an embarrassing shut out at the hands of Baltimore, 23-0. Quarterback Brett Hundley threw three interceptions. Meanwhile, Pittsburgh is on a roll. Ben Roethlisberger tossed four scores last week against Tennessee.

It's hard to make a decision on the Ravens. One week they score 40 points and shut out their opponents, and the next the team lose without giving much of a fight. Currently at 5-5, the Ravens need to keep winning to make the playoffs. Joe Flacco isn't really doing much for the team at quarterback (nine touchdowns and 11 interceptions), and Baltimore is far too reliant on its defense. The Texans could take advantage of the Ravens lack of offense. But Houston is 1-3 on the road this year. Quarterback Tom Savage isn't bad, but he isn't anything special either. This game will be decided by which quarterback plays slightly better than the other.