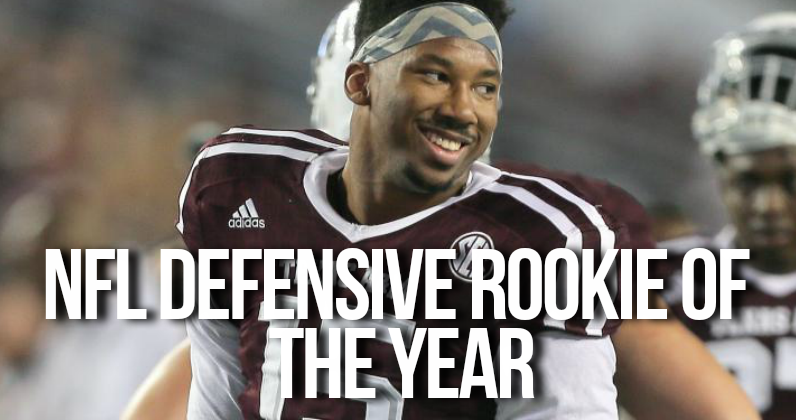 Now that the 2017 NFL season has officially began, in terms of training camps being open and preseason football starting up, we're starting to see which defensive players selected in the 2017 NFL Draft will have the opportunity to “come out of the gates” fast, and make an immediate impact on their team. Along those lines, we've put together a short list of the players whom we think have the best chance to win the NFL Defensive Rookie Of The Year award, along with the current odds for each one of them to win the award.

At 16-to-1 odds, Haason Reddick presents a fascinating combination of choice odds plus potential for immediate contribution. Reddick exploded onto the NFL Draft scene this year after a stellar week at the 2017 Senior Bowl, where he demonstrated a combination of speed and relentlessness that made him stand out among the competition there. As an explosive, quick-twitch athlete, he will be a very intriguing chess piece in the defense of the Cardinals, which has developed the rightful reputation of using super-athletic players in a myriad of creative ways. Add in the fact that 12 of the last 20 winners of the NFL Defensive Rookie of the Year award played linebacker, and you'll see why Reddick could be a great player to make a wager on.

No player shot up draft boards in the weeks and months leading up to this year's NFL Draft the way Solomon Thomas did; he went from a “solid mid-first round pick” to a “consensus top five pick” as the pre-draft process went on. But the biggest reason why Thomas has the chance to succeed early is that opponents won't be able to key in on him exclusively when they play Thomas' 49ers, because he'll likely be lining up next to Arik Armstead and DeForest Buckner — San Francisco's top picks in the last two NFL Drafts (respectively). Thomas reminds you of a poor man's Aaron Donald at times (don't forget that Donald won Defensive Rookie of the Year in 2014), and has a chance to be the Michael Bennett of the 49ers defense (who will be a running a Seattle-style 4-3 hybrid this year). Expect him to make an immediate impact in San Francisco.

It shouldn't be much of a surprise that the player taken #1 overall, and someone whom basically everyone considered to be the best prospect in the entire draft, would be the odds-on favorite to win the rookie of the year award. Garrett is absolutely in the same class of defensive end prospects as Jadeveon Clowney (#1 overall pick in 2014) and Mario Williams (#1 overall pick in 2006). He's an athletic, well-built, and very smart defensive end who opposing teams will constantly have to worry about. His explosion off the line is well above average, but the beauty of it is the way he builds off that burst with his repertoire of pass rushing moves. If he's playing against any average offensive tackle in the NFL, he is going to humiliate them if they don't have the combination of athleticism, strength, and sophistication to take on Garrett. Postseason award voters tend to favor “sexy” statistics, and it wouldn't be the slightest bit surprising if Garrett led his entire draft class in total sacks this upcoming season. That should solidify him as the early favorite to win the award.

NFL Defensive Rookie Of The Year