Arizona Poised for Postseason Run Thanks to David Johnson 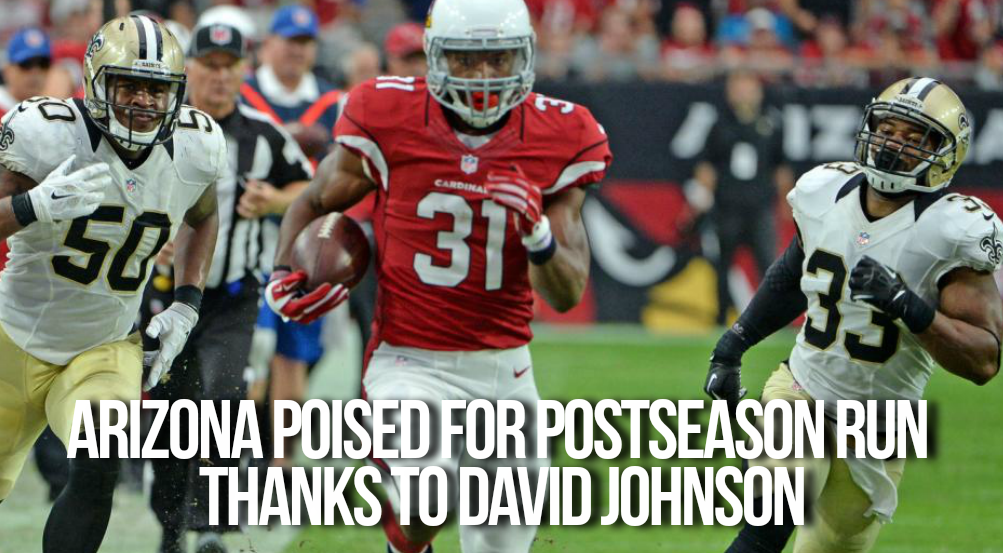 After a 13-3 season culminated by a trip to the NFC Championship game, the Arizona Cardinals stumbled last year through a difficult 7-8-1 campaign. Injuries played a big role in the Cardinals’ 2017 season. One player who didn’t suffer so much was now third-year pro David Johnson. The Cardinals running back led the NFL in total yards from scrimmage and touchdowns and is poised to lay claim to an NFL Most Valuable Player award. With it, he might just bring Arizona back to the brink of a Super Bowl.

Johnson grew up in Clinton, Iowa, where even at a young age his athletic ability was apparent. When he went out for football at Clinton HS, he insisted that he play running back like his idol, Emmitt Smith. The young Johnson had decent size, great speed, and his strength bordered amazing. As a high school junior, Johnson power cleaned 315 pounds. During his senior football season, the 6-foot-1-inch, 225-pound Johnson scored 42 touchdowns. Still, schools like Iowa and Iowa State were not sold.

Iowa told Johnson that he probably shouldn’t get his hopes up about walking on with the Hawkeyes. Cyclone Nation sent Johnson a piece of recruiting mail. It was addressed to David Jacobson. In the end, Johnson would matriculate at Northern Iowa where he once again found himself a virtual unknown. Johnson was first a safety then a wide receiver then a running back. Finally, he was both a running back and a receiver.

Little did Johnson know at the time that his experience at UNI would pay off big time in the NFL.

After four years of college football at Northern Iowa, an FCS power, Johnson amassed 4,682 rushing yards, 1,734 receiving yards, and a total of 63 touchdowns. He was invited to the NFL Combine where he ran a very fast 4.50 40-yard dash, recorded an impressive 41-inch vertical jump, and pumped out 25 reps with his bodyweight, 225 pounds, on the bench press. After all the accolades, some All-Star games, and the testing; Johnson still found himself under the radar. When he attended the Senior Bowl, a Jacksonville Jaguars scout asked him if he was a safety or a linebacker. He would enter the 2015 draft as a potential draft pick, but probably wouldn’t go any higher than the fifth round.

When the 2015 NFL draft hit the second round, Arizona was in need of a running back. They were almost certain they were going to land Nebraska’s Ameer Adbullah. Cardinals general manager Steve Keim was on the phone with Abdullah informing the young Cornhuskers star that Arizona was going to take him with the 55th overall pick. Enter the Detroit Lions.

With the 54th pick, the Lions surprised everyone, including Keim, by taking Abdullah. With Abdullah gone, Keim and the Cardinals decided to trade down and selected a ‘tweener’ in pass rushing linebacker Markus Golden out of Missouri. The 6-3, 260-pound Golden would start six games as a rookie and last season finished third in the league with 12.5 sacks. The Cardinals would then find Johnson available in the third round and pulled the trigger with the 86th overall pick. If not the Lions, the Cardinals may have not been able obtain either Golden or Johnson.

The first time Johnson touched the football in an NFL game he turned a short pass from Cardinals quarterback Carson Palmer into a 55-yard touchdown reception. The following week, Johnson returned a kickoff 108 yards in a game against the Bears. He would then show glimpses of what was to come with three starts at the end of the 2015 season. He would finish that year with 581 yards rushing and 457 receiving.

Johnson opened the 2016 season with 15 straight games of over 100 yards from scrimmage. His total matches the NFL record set by, ironically, Detroit’s Barry Sanders back in 1997. If not for a knee injury in last year’s regular season finale, Johnson would likely have become just the third player in NFL history to rush for 1,000 yards and accumulate 1,000 yards receiving.

Last year, he finished with 1,239 yards on the ground and caught 80 passes for 879 yards. Only Marshall Faulk and Roger Craig have had seasons with both 1,000-plus yards rushing and 1,000-plus receiving. It is Johnson’s goal for the 2017 season.

Over the last four seasons, the Cardinals have won 41 games or an average of 10 wins per season. The problem is that they only have one playoff win to show for all their victories. Cardinals head coach Bruce Arians has the roster to win the NFC West this season. First and foremost, the Cardinals need remain healthy throughout the regular season. The three offensive line injuries did not help Arizona last year.

It also doesn’t help that the Cardinals lose five defensive starters from a year ago. They signed LB Karlos Dansby and safety Antoine Bethea as replacements, but Dansby is 35 years old and Bethea 32. The point is that the Cardinals’ window of opportunity may be closing all too quickly. Offensively, Arians returns veteran quarterback Carson Palmer, who is entering his 15th season in the NFL. Wide receiver Larry Fitzgerald, one of the NFL’s best wide receivers, is back for his 14th season in the league. The roster is a good one, but several pieces of the puzzle are near the ends of their career. If they are going to make a Super Bowl trip a reality, now is the time to take advantage.

The Cardinals will open with Detroit on Sept. 10 followed by a trip to Indianapolis. In Week 3, Arizona meets Dallas on Monday Night Football. The Cardinals are at home for the Cowboys, a game that could reveal to Arians the likelihood of a successful campaign in 2017. With the talent the Cardinals have on the roster, like David Johnson, Arizona will contend for a conference and league championship.