NFL Week 11 Picks and previews: The race for the NFL playoffs continues 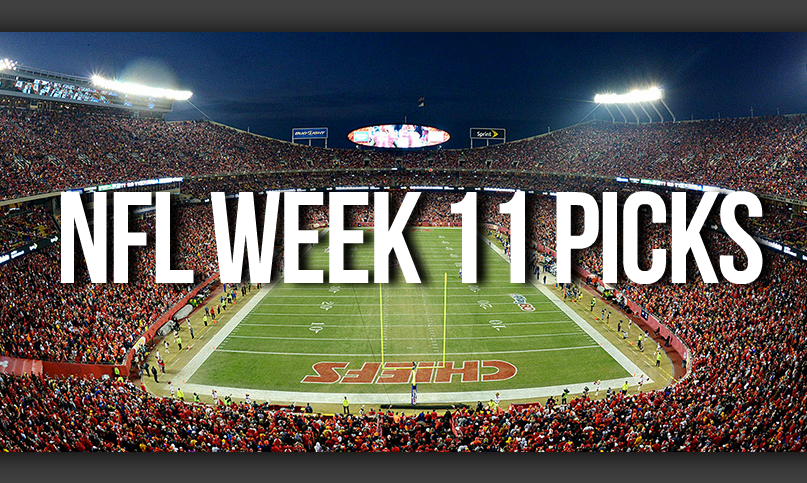 NFL week 11 picks sees the Carolina Panthers, Indianapolis Colts, New York Jets and San Francisco 49ers all enjoy a bye week. All four teams will get a weekend off to prepare for the final stretch of the regular season, although Carolina is the only team likely of making the NFL postseason.

There are 14 NFL week 11 picks for games to be played with the action kicking off on Thursday night in the United States. How will the weekend unfold?. Let's take a look.

Both team have won four straight games. The Titans are top of the AFC South, but head to Pittsburgh on Thursday night to face a team that is 2-1 at home. Ben Roethlisberger continues to lead the Steelers well. He threw two touchdown passes and for 236 yards last time out against Indianapolis.

This NFC North match up pits a Lions team that is trying to make it into the playoffs with a Bears team that is just trying to reach .500. The Bears narrowly lost to the Packers in week 10 while the Lions continued the Browns awful season, beating them 38-24. Lions quarterback Matt Stafford has thrown for 17 touchdowns this season and has a quarterback rating of 96.3. Going to Soldier Field is never easy, but against this Bears team, it is a winnable game.

Jacksonville is not what the Browns need right now. After another loss in week 10, the Browns now take on the 6-3 Jags. NFL number crunchers have the Jags projected to win 11 games this season. In preseason, it was projected the team would win just 6.7. Jacksonville has overachieved and a win in NFL week 11 coupled with a Titans loss will see them take sole possession of first place in the AFC South.

The Ravens have been incredibly up and down this season. Just a few weeks ago, the team blasted Miami, 40-0, but followed it up with a loss. Baltimore is coming off of a bye and go straight to Green Bay to play a team with a struggling quarterback. The Packers may have beaten the Bears in week 10, and Brett Hundley may be improving his completions; but the Ravens defense gives up fewer points than the Packers. It's a tough game to call, but with an improved Hundley and playing at home, the Packers should win their second straight game.

The Texans have gone from a .500 team and possible AFC South winner to being a team propping up the division. Houston has lost three straight, including being blown out 33-7 by the Rams in week 10. Arizona probably won't make the playoffs and has had injuries disrupt what could have been a promising season. Carson Palmer and running back David Johnson could return from injury in week 16. By then, the Cardinals will be well out of the playoff picture. Houston has its own injuries and quarterback Deshaun Johnson will sit out NFL week 11.

Tampa Bay finally won last weekend, while the Dolphins lost to Carolina. The Bucs had been losers of five straight until Ryan Fitzpatrick led the team to victory against the Jets. The Bucs are 0-4 away from home this season, and even though Miami is just 200 miles away, the team could struggle against the Dolphins. Fortunately, Miami has the worst scoring offense in the NFL. The Dolphins defense hasn't been much better, and has given up 37.3 points per game during their current three game losing streak. Can Tampa Bay win two in a row?

Every week, we see if the Rams can continue to win football games. So far, the team has shown the NFL it can. However, this week the Rams go to Minnesota to tangle with the 7-2 Vikings. Minnesota is 4-1 at home, and has the fifth best defense in the NFL in terms of fewest points allowed per game (18.3). Just so happens, the Rams defense is better, and gives up just 18 points per game. Meanwhile, the Rams score the most points per game (32.9) and have an electric offense. The Vikings offensive line hasn't allowed a sack since week 4 and Case Keenum is playing stellar football. This is the game of the week.

Kansas City is coming off of a bye after being beaten by Dallas in week 9. The Giants, on the other hand, are coming off of another loss. Making things worse, the Giants are playing at home where the team is 0-4. The Chiefs should get back to winning ways and make it three wins against the NFC East this season.

Saints fans should be excited about their team. New Orleans has reeled off seven straight wins, which is tied for the most in the NFL currently. New Orleans blew out Buffalo in Buffalo in NFL week 10, 47-10, and quarterback Drew Brees didn't even throw a touchdown pass. The team is doing it with the run, and during its seven-game win streak, the Saints have accumulated 1,139 yards on the ground and 14 touchdowns.

The playoffs could be slipping away from Buffalo after week 10's loss to New Orleans. Just a few weeks ago, Buffalo was 5-2, but now the team is 5-4. The Bills run defense has been porous in the last two weeks and the Chargers could expose them in NFL week 11. The good news for Buffalo is the Chargers rushing game only averages 88.7 yards per game.

Both teams go into NFL week 11 at 3-6. However, the Broncos look to be in far worse shape than the Bengals. At one time, Denver was 3-1, and looked like it could challenge the AFC West. Those days are gone, and the team is just trying to finish the NFL season with a respectable win total. How bad has Denver's defense been? It has given up 92 points combined in the last two games. The Bengals have been sloppy this season, and continue to turn the ball over. The run game isn't great either, and the team is dead last in the NFL in yards per game rushing.

Tom Brady's Patriots are 4-0 on the road. Is there any hope for Oakland to win against the Super Bowl champions? Probably not. The Raiders have been poor at protecting the ball and are –7 in turnover differential.

Will the Eagles magical season end in NFL week 11? The Cowboys Ezekiel Elliot will miss another week of action as he serves his six-game suspension. The Cowboys had been winning with the running back in the team, but last week were blown out by the Falcons, 27-7, without him. The Eagles Carson Wentz is an MVP candidate, and his play has propelled the Eagles to the best record in the NFL. Without Elliot, the Eagles defense should have an easier time with Dallas.

The Falcons have stuttered this season and have failed to take flight like in 2016. Seattle is playing solid football and Russell Wilson is having a brilliant campaign. He has thrown 19 touchdown passes in 2017. The Seahawks are chasing the Rams for the best record in the AFC West. A win on Monday Night Football coupled with a Rams loss to the Vikings, and the two teams will be level on wins and losses.

[ad_1] “You like that?!” If you are a Minnesota Vikings fan, you definitely liked what…

NFL Divisional Round Picks and Predictions 2020