NFL Offensive Rookie Of The Year – See the Top Picks 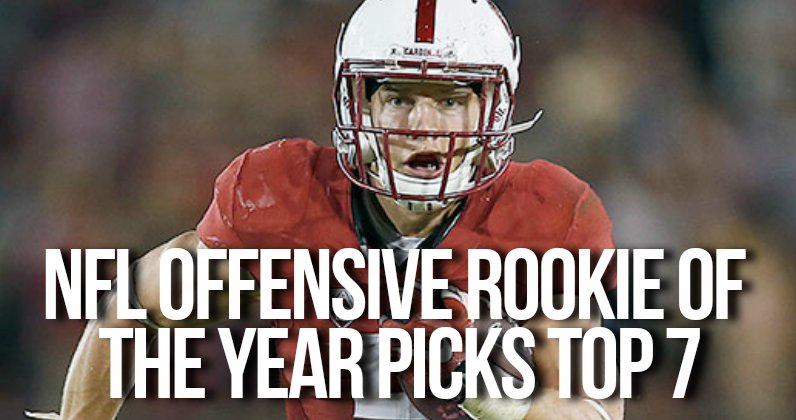 With the 2017 NFL Draft officially over, now we have an idea of not only where each of the top college prospects will begin their professional football careers, but also the opportunities and circumstances in which they can potentially succeed — or fail — based on which NFL team selected them. We can get an idea as to who ill be in the running for the NFL Offensive Rookie Of The Year.

Building on that: which of those college prospects are in the best position to come out of the gate with a fast start, and position themselves to win the NFL's Offensive Rookie Of The Year award? Here's a look at the top seven guys who have to be considered the early front-runners for the designation:

Top Picks For NFL Offensive Rookie Of The Year

7. Deshaun Watson, QB, Houston Texans — It's not entirely out of the question that Deshaun Watson could actually beat out incumbent quarterback Tom Savage, and win the starting job under center for the Texans. It's not exactly like Savage lit the world on fire in his few starts last year. Watson is easily the most talented quarterback on the roster. He would have an offense filled with highly capable weapons around him to help him succeed.

6. John Ross, WR, Cincinnati Bengals — The Bengals already have a superstar wide receiver in AJ Green, but offenses did everything they could to clamp down on Green last season, and force the Bengals to beat their defense with anyone else besides Green. That could open up a lot of opportunities for Ross to catch passes from quarterback Andy Dalton. Ross clearly has big play ability. This was in evidence by his record-setting 4.22 time in the 40 yard dash at the 2017 NFL Combine.

5. Mike Williams, WR, Los Angeles Chargers — The Chargers don't know how much longer they'll have the services of quarterback Philip Rivers. But, for whatever duration of time he continues to play from here on out, he'll have the chance to throw to one of the most physically imposing receivers the Chargers have ever had. Williams is built like a basketball power forward: he's got great hands, he's fantastic at going up and getting the football at its high point, and he can overwhelm corner backs with his combination of size, athleticism, and body control.

4. Corey Davis, WR, Tennessee Titans — The Titans raised a few eyebrows when they selected Corey Davis with the fifth overall selection in the draft, especially considering Davis couldn't work out during the pre-draft process, due to injury. But Davis finished college as the all-time leader in major college football in receiving yards (with 5,285 in four years), and was drafted to be the #1 receiving weapon for the emerging Marcus Mariota.

3. Dalvin Cook, RB, Minnesota Vikings — Dalvin Cook fell to the second round of the NFL Draft because of a combination of injury and character concerns. But what can't be denied is the fact that Cook is one of the most dynamic and polished running backs to come out of the draft in years. It should be just a matter of time before he takes the starting job away from the recently-signed Latavius Murray. He'll provide the Vikings with a dual-threat option which they haven't had, even with the great Adrian Peterson.

2. Christian McCaffrey, RB, Carolina Panthers — Simply put, Christian McCaffrey is going to add a brand new dimension to the Panthers offense. He'll be an electric change-of-pace running back to Jonathan Stewart, and he'll provide a receiving option out of the slot — with a lethal ability to produce yards after the catch — which quarterback Cam Newton hasn't had at any point in his career. He could easily break 1,500 combined yards (rushing and receiving) his rookie season. One of the favorites for NFL Offensive Rookie Of The Year at Bovada.

1. Leonard Fournette, RB, Jacksonville Jaguars — In 2015, when the Jaguars offense enjoyed a breakout season of sorts, it came as a result of high-flying passing attack that challenged defenses vertically. The addition of Leonard Fournette will give defensive coordinators headaches, as they'll be forced to choose between keeping more guys near the line of scrimmage to stop Fournette, or risking him running wild through the second level of the defense. Fournette is a borderline superhuman combination of power, speed, balance, agility and vision. He'll only be limited by the imagination of the Jaguars' offense.