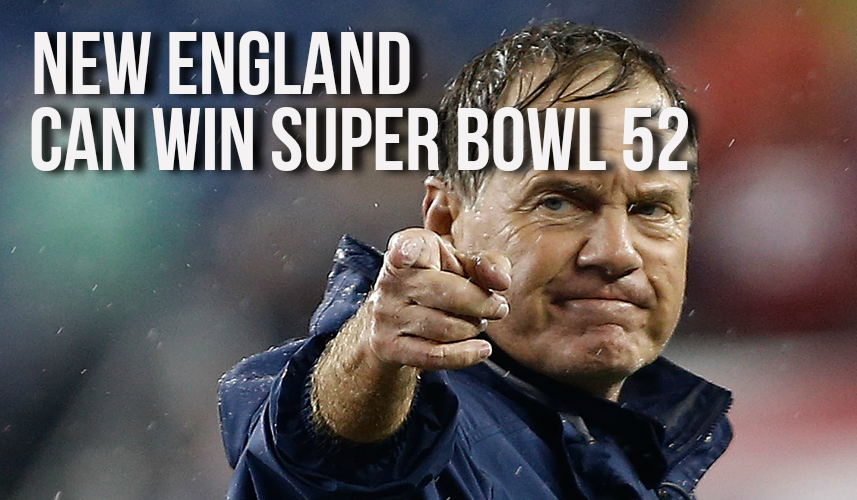 Who will win Super Bowl 52? – In a matter of only hours after the conclusion of Super Bowl LI, the New England Patriots were already considered the favorite to win Super Bowl LII. Of course, you could chalk that up to the hype and euphoria around the team winning their fifth Super Bowl in 16 years, and completing the greatest comeback in Super Bowl history.

But after the proverbial dust of the offseason has settled, it still seems like the Patriots are, far and away, the team that's head and shoulders above the 31 other teams in the NFL. To be the champion, you have to beat the champion. Not only are the Patriots the reigning champions, but they spent the offseason getting better.

We'll start with free agency. The Patriots, under head coach Bill Belichick, rarely make any overtures towards free agents sure to garner lucrative contracts. That's why it came as a surprise to many people when the Patriots quickly inked cornerback Stephon Gillmore to a five-year deal with $65 million, on the first day of free agency.

Coming off a Pro Bowl season, Gillmore gives New England a pair of Pro Bowl cornerbacks, alongside Malcolm Butler. Their other big move in free agency wasn't actually an acquisition, but rather the retention of Pro Bowl linebacker Dont'a Hightower.

Hightower opted to return to New England on a four-year, $35.5 million deal. As the middle linebacker for New England (and a favorite of the coaching staff), Hightower was an integral part of the Patriots defense. Being able to retain his services was a huge win for them.

On offense, New England gave future Hall of Fame quarterback Tom Brady yet another weapon, in the form of wide receiver Brandin Cooks. The Patriots sent the #32 overall selection in the 2017 NFL Draft to New Orleans for the rights to Cook, who will provide Brady with a deep threat that was sorely lacking last year. Add in the acquisitions of defensive end Kony Ealy from Carolina (an underrated pass rusher) and tight end Dwayne Allen (who has shown the ability to be a dominant red zone option), and and you have a roster that's marked by significant additions to last year's team.

Fast forwarding ahead to the NFL Draft, where the Patriots were left with only four selections after their offseason moves, and still managed to snag one of the best draft classes of any team in the league. With their two picks in the third round (their first two picks in the draft overall), they selected edge rusher Derek Rivers from Youngstown State, and offensive tackle Antonio Garcia from Troy. Both players fit what the Patriots are looking for perfectly: developmental players with talent, intelligence, and work ethic that simply needs to be cultivated by a great coaching staff. The same goes for their remaining two picks, whom many argued were great selections at the time they were taken: defensive end Deatrich Wise Jr. from the University of Arkansas (fourth round pick), and offensive tackle Connor McDermott (sixth round pick).

It should speak volumes that the Patriots devoted their entire draft to edge rushers and edge protectors, showing a level of intuition about both where the Patriots have had weaknesses over the past few years, and where many games are won and lost.

New England already has what will go down as one of the greatest — if not THE greatest — combination of head coach and quarterbacks in Bill Belichick and Tom Brady. Then, the juxtaposition of that fact, plus the rich only getting richer, next to the fact that nobody in their conference really seemed that close to being able to stop them from advancing to the Super Bowl, shows why the Patriots are still the team you'd want to place your money on, as far as predicting who will win Super Bowl 52 next February.

The Best NFL Sportsbook Sign Up Bonus for the 2018 Season