Home Is it Legal to Gamble Online in the US?
1.

Is it Legal to Gamble Online in the US?

All states in the US have their right to define their meaning of gambling. Thus, each state government has its freedom to either legalize or prohibit a particular form of gambling such as online gambling.

On the other hand, three federal gambling laws are being followed in all states. These three federal laws are the Interstate Wire Act, The Professional & Amateur Sports Protection Act (PASPA), and the Unlawful Internet Gambling Enforcement Act (UIGEA).

Though most states legalized gambling, other states chose to make gambling as an illegal activity. Furthermore, these laws will give a clue about whether online gambling is legalized in the US or not.

The Interstate Wire Act is an act that prohibits online or wireless gambling activities such as transmitting bets or wagers. An individual who is guilty of this act will be fined or imprisoned for not more than two years. The act has a great impact on the United States gambling industry, but one of the purposes of this is to prevent online bets and wages to be a channel for other related crimes.

Meanwhile, the Amateur Sports Protection Act (PASPA), also known as “The Bradley Act”, is an act that aims to stop sports betting in the United States. The goal of the act was to stop the spread of sports betting in the United States. However, this act is considered as the least impactful and the least known in the gambling industry due to the legalization of gambling in other states of America such as South Dakota, Colorado, Iowa, Mississippi, and Missouri before its implementation.

Lastly, the Unlawful Internet Gambling Enforcement Act (UIGEA) is an act prohibiting online transactions related to gambling activities. Furthermore, this includes prohibiting the use of credit, electronic fund transfers, checks, or other means of payment related to gambling. It requires any payment system to detect if the system is being used for gambling transactions or prevent the system from being used for online gambling payment.

Among the 50 states of America, 21 states already legalized sports betting. However, not all of these 21 already implemented online gambling. As of now, 24 states are still working for its legalization while 5 states didn’t take any action yet to legalize sports betting.

States in the United States that Legalized Gambling 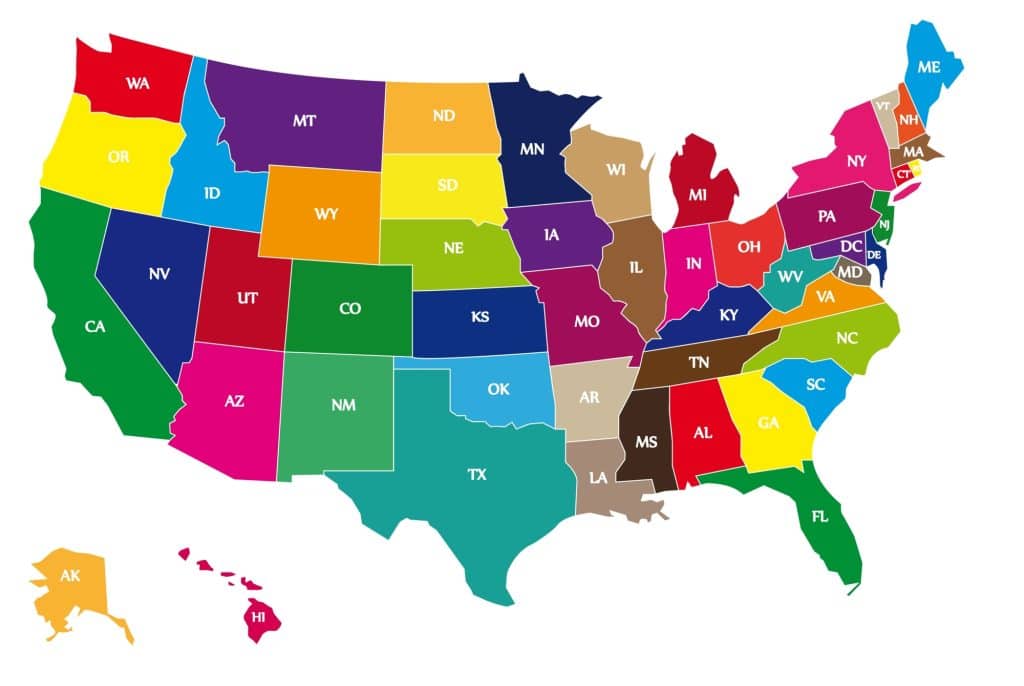 See which US states have legalized gambling.

Nevada is one of four States that was exempted from the Amateur Sports Protection Act (PASPA) due to the legalization of sports betting or gambling betting before the implementation of the said act. It is the very first state of America that fully legalized casinos. The state is already known for its gambling industry, and with this, it is known for its varied connections with other states in terms of monitoring and risk management.

All types of gambling are allowed except state lottery. Thus, those who want to participate in state lottery should go to other states such as Arizona and California. Nevada does not only play live gambling, but it also allows online gambling such as off-track betting, online poker, and online casino games. However, there are restrictions involved in playing or in allowing online gambling to operate. To know further about the regulations of Nevada on gambling, read Gaming Statutes & Regulations.

The same with Nevada, Delaware is one of the states that were exempted from the Amateur Sports Protection Act (PASPA). It is the second state that offers more forms of gambling. In the year 2018, the States started offering “a full-scale sports gaming operation” that allows single-game betting.

Furthermore, sports wagering was offered online as an option. However, this was stopped due to Federal law. Some of the online games that are being offered in the state are off-track betting on horses, blackjack, roulette, and Jacks or Better video poker. Unlike Nevada, Delaware is also offering state lottery.

Sports betting was legalized in New Jersey in the year 2018. It was first started by William Hill Sportsbook and followed by Borgata in Atlantic City, FanDuel's first sportsbook, and other sportsbooks in New Jersey. Afterward, it became the largest market in terms of online gambling in the United States.

The forms of online games that are legalized in the state are online sports betting, online casino, and online poker. Despite the legalization of either live or online gambling in New Jersey, it is still required that a particular kind of gambling should be authorized through the votes of the people. Furthermore, the state has a law that maintains fairness and the true essence of gambling.

Those who have licensed casinos are only the ones who are allowed to operate different forms of gambling and lotteries. Those who are involved in gambling, without any license, can be convicted of a crime. Furthermore, internet or online gambling is considered as a crime.

It was during the year 1994 when casinos were legalized in West Virginia. It defined gambling as risking or betting any valuable possession such as money on any game of chance. Video lottery games, Bingo, and raffles are some of the gambling activities allowed in the state.

In the year 2018, online sports, online casinos, and online poker were already legalized in the state. West Virginia already has an online betting application. However, one of the gambling activities that are not allowed is animal fighting. Those who failed to follow the regulations about gambling will pay a fine ranging from $5 to $ 1000 along with a 2-12 months imprisonment.

Horse racing was allowed in the state during 1990. However, other forms of gambling activities started to develop such as casino gambling, online casinos, Live Poker, Online Poker, Sports Betting, Lottery Betting, and Bingo Games. Mexico has about 21 casinos and 5 racinos.

Pennsylvania has a well-established land-based gambling industry. It passed a bill in the year 2017 which introduced online gambling and daily fantasy sports as a legal activity. Due to this, online sports betting, online casinos, and online poker were already launched.

Rhode Island has two types of legal online gambling: TwinSpires and XpressBet. One form of legal live gambling being played is the state lottery that includes the traditional style of a lottery. However, the jackpot could be a Powerball or a mega-millions.

New York limited gambling activities to casinos. The state only can allow 11 casinos to operate. The first known gaming option in the state is the New York Lottery. The second one is the state’s twenty tribal facilities.

Raffles, bingo, and other casino-style games could be used for charity events as supported by the charitable gambling laws. Online gambling is considered illegal as stated in the New York criminal code. For further reading about the gambling laws of New York, read or visit New York State Gaming Commission, “Shipboard Gambling” from the Business Integrity Commission, and New York Charitable Gaming Law.

Aside from the states elaborated above, there are also other states that legalized forms of gambling. Some of them are as follows:

Meanwhile, the five states of America that did not pass any bill or activity related to the legalization of any form of gambling are Alaska, Idaho, Nebraska, Wisconsin, and Wyoming.