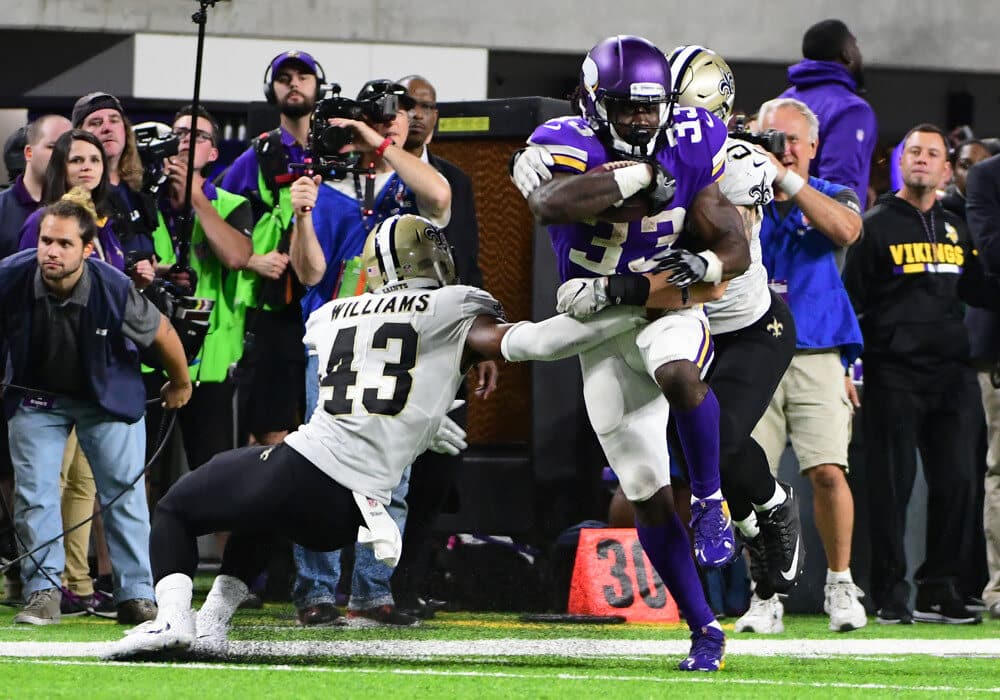 Running back Dalvin Cook and the Minnesota Vikings are making a strong playoff push after starting the season 1-5. (Photo by Nick Wosika/Icon Sportswire)

The Arizona Cardinals and Minnesota Vikings are tied for the third and final Wild Card in the NFC with 6-6 records but are going in opposite directions.

The Cardinals have lost three straight games and four of five. The Vikings have won back-to-back games and five of their last six.

Though both have the same record, the Vikings are now given better odds of reaching the playoffs.

The odds were different a week ago.

The Cardinals were odds-on favorites to get the postseason at -126. Meanwhile, the Vikings’ odds were +208.

Both teams continued their divergent paths this past Sunday with the Cardinals losing at home to the Los Angeles Rams 38-28 as 2.5-point underdogs.

The defeat dropped the Cardinals two games back in the NFC West race behind the co-leading Rams and Seattle Seahawks – both 8-4 – with four games to play.

While Kyler Murray threw for three touchdown passes for the Cardinals, he completed just 21 of 39 for 173 yards. In the fourth quarter, he lost a fumble when sacked and threw an interception that was returned by 35 yards for a touchdown by Troy Hill, pushing the Rams’ lead to 38-21

The Vikings slipped by the lowly Jacksonville Jaguars 27-24 in overtime at home despite being 10.5-point favorites.

Dan Bailey kicked the game-winning 23-yard field goal with 1:49 remaining after missing two extra points and a field goal earlier. The first miss, from 51 yards, came at the end of regulation and could have won the game.

RT if you love The Hitman#ProBowlVote @HarriSmith22

While Minnesota’s win might not have been aesthetically pleasing, it did get the Vikings to the .500 mark for the first time this season. It also sent the Jaguars to their 11th straight loss.

The Cardinals and Vikings do not play each other in the regular season. Thus, the head-to-head tiebreaker will not apply if the two wind up tied for the third wild card.

The second tiebreaker is record within the conference. Both teams are 4-4 against NFC teams.

The third tiebreaker is best record against common opponents. The Vikings currently hold a slight edge there at 2-2 while the Cardinals are 2-3.

I deal with those NFL playoff tiebreakers and scenarios every week for our Playoff Picture, and I can tell you that what @SteveKornacki is doing at that board is very difficult!

The Cardinals have a somewhat more favorable schedule as their remaining opponents have a combined 21-26-1 record for a .448 winning percentage. Arizona also plays two games at home and face only one team with a winning record.

Conversely, the Vikings’ opponents have .563 winning percentage (27-21). Minnesota has only one home game left and play two teams with winning records.

Here is a look at each team’s schedule:

The Tampa Bay Buccaneers are one game ahead of the Cardinals and Vikings in the wild card standings. The Buccaneers are 7-5 after dropping three of their last four games.

The Giants and Washington are tied for first place in the NFC East and one of the two is likely to qualify for the playoffs as the division champions.

Washington is the hottest of the 5-7 teams as it has won three games in a row, including upsetting the previously unbeaten Steelers in Pittsburgh on Monday night.

Do we have everybody's attention now? pic.twitter.com/Qk2EKTFSz2

The Giants are also playing well with five wins in seven games since an 0-5 start.

Most likely, either the Cardinals or Vikings will reach the playoffs but not both. Considering the teams’ recent track records, Minnesota looks like the better bet.