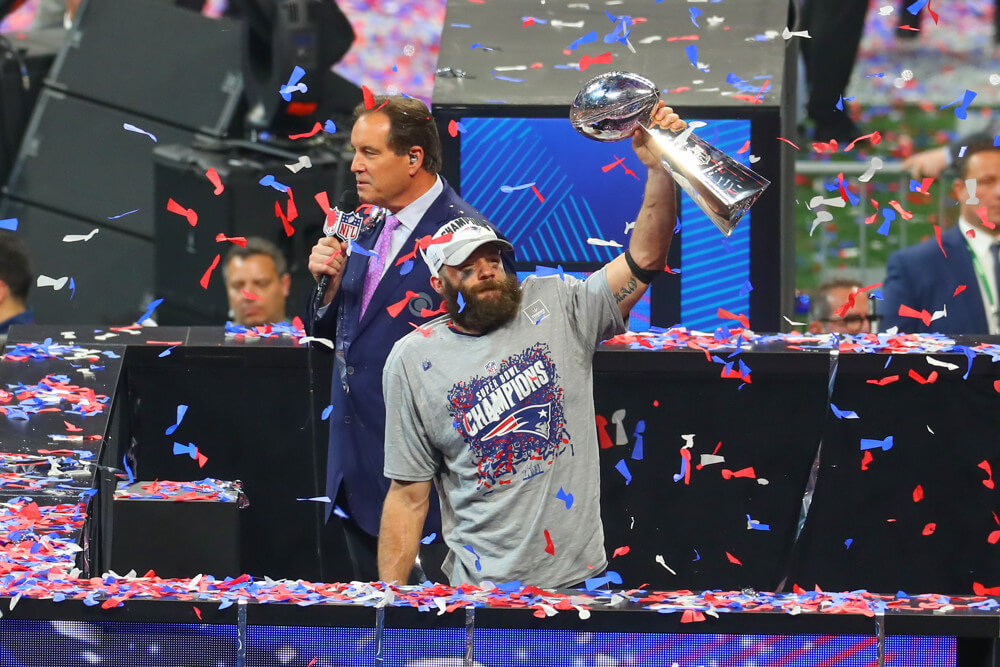 For the sake of your bank roll, we hope you didn’t bet on any streakers during Super Bowl 53 or any Halftime Show performers taking a knee in protest.

Sure, the 10-1 payout can be tempting, but there’s a reason online sports betting sites are offering those odds: the outcomes were very predictable.

The outcome of the Super Bowl itself, however, was not what most were expecting – a 13-3 Patriots victory. New England winning wasn’t very surprising, but the lack of points certainly was.

As a result, there was a lot of money to be made if you bet the right props. Below you’ll find the ten prop bets that would have netted you the most money during the 2019 Super Bowl. (If you just want the answers to all the props, see our Answers/Results to All Super Bowl 53 Props.)

Personally, I was thrilled to have hit #8 and #7 on this list. I’d love to hear from you if you were lucky/smart enough to hit any of the top five.

10) No Touchdowns in 2nd Quarter

The 4th was the only quarter that did see a touchdown.

Both the Rams and Patriots averaged the most points in the 2nd quarter in the regular season with 10.9 (league-high) and 9.8 (fourth-best), respectively.

And with a total that closed at 55.5, along with two explosive offenses, it seemed unfathomable there wouldn’t be a touchdown in the final two minutes of the first half, let alone the entire 2nd quarter.

9) Rams Shutout in 1st Half

The Los Angeles Rams had not been shutout in the first half of any game during the 2018 NFL season.

The fewest points they scored in a first half this season came in Week 14 in that miserable game against the Bears. But they even managed six points in the first half of that one.

There was only one other time this season when the Rams were held under 10 points in the first half: Week 8 against the Packers.

“This is a Bill Belichick special” – @tonyromo@KVN_03 and the @Patriots make a BIG stop on 3rd down.

But they could not manage a single point in the first half against the New England Patriots in Super Bowl 53, which offered a nice 6-1 payout for any who jumped on this prop.

8) No Points in 1st Quarter

I’m expecting not to be the only one who felt there was a lot of value in +650 for no points in the 1st quarter.

We knew the Patriots were slow starters in the Super Bowl, having only managed 3 total points in the first quarters of their eight previous Super Bowl appearances in the Tom Brady-Bill Belichick era.

And it was reasonable to assume the young and inexperienced Los Angeles Rams would also stumble a little out of the gate under the bright lights.

No one is scoffing at the 13-2 payout here with Sony Michel scoring the first touchdown of the Super Bowl, but you could have had +800 odds on Michel if you made this bet before Super Bowl Sunday.

You would have hit the jackpot twice with this Michel touchdown had you bet him to not only score the first touchdown but the last one, too. BetOnline was offering +500 with Michel in that prop.

6) Sacks for the Patriots

Entering the 2019 NFL Playoffs, the Los Angeles Rams were only giving up 2.1 sacks per game, the eighth-fewest in the NFL. Jared Goff was only sacked once in the Rams’ two playoff games leading up to the Super Bowl, as well.

The @Patriots D getting after Jared Goff in the 3rd quarter.

But Goff found himself under constant pressure in Super Bowl 53, thanks to some well-executed line stunts and well-disguised blitzes from the Patriots. Led by Dont’a Hightower, who recorded 2.0 sacks, New England brought Goff down four times on Sunday night.

Had you nailed five sacks between the two teams, you would have been getting +500 odds from BetOnline.

5) Cory Littleton to Get 1st Interception

Rams linebacker Cory Littleton had pulled down three interceptions during the 2018 regular season, earning a spot on the NFC Pro Bowl roster.

Tipped and PICKED.@RamsNFL D with the early takeaway!

But two of those interceptions came in the final game of the regular season against the 49ers, led by Nick Mullens at quarterback. Generally, Littleton spent most of his time chasing around running backs when in coverage, which clearly wasn’t a matchup online sports betting sites liked for the Rams linebacker.

Wide receivers had only won six Super Bowl MVPs, with the most recent being Steelers WR Santonio Holmes in Super Bowl 43.

Holmes hauled in nine balls for 131 yards and the game-winning touchdown grab in Pittsburgh’s last-minute victory over the Cardinals. Julian Edelman caught 10 passes for 141 yards, but didn’t need the touchdown to win the honor.

Edelman was feasting on Nickell Robey-Coleman, the corner who got away with the PI in the NFC Championship game, in the slot in the first half, and regardless of who the Rams lined up across from him in the second half, there was no stopping him.

If you had the gumption to take Edelman for MVP, you’re laughing today after a 25-1 payout.

This is nothing more than a shot in the dark.

The Patriots average margin of victory this season, including playoffs, was 7.4 points. They did not win a single game this year by exactly ten points.

First Half Margin of Victory

It didn’t offer as much, for good reason, but a 17-2 payout with the Patriots to be leading by 1-3 points at halftime is cause for celebration, too.

*BetOnline offered exact options up to nine and then included a 10+ option; six or seven touchdowns had the shortest odds at +450 each

The Rams had scored five touchdowns in the 2019 NFL Playoffs while the Patriots totaled 10. As mentioned earlier, with a total that closed at 55.5, and after the shootout we witnessed last year, the idea of only seeing one touchdown was crazy – 33-1 kind of crazy.

You could have also cashed out pretty big by betting the Rams not to score a touchdown in the Super Bowl.

*BetOnline offered options up to six touchdowns and then included a 7+ option; four touchdowns was the expected outcome at +400 odds

The Rams had only failed to score a touchdown in a game once under Sean McVay, coming in that disastrous Week 14 trip to Chicago this season.

Even if you weren’t feeling so bold to bet on one of the above touchdown options, BetOnline was offering a solid 10-1 payout for less than four touchdowns to be scored.

If #3 on this list was a shot in the dark, I’m lost for words on what to call this one.

Your odds of nailing either of these are comparable to betting a single number in roulette, but the payout is much better than just 33-1.

WOW.@BumpNrunGilm0re PICKS OFF Jared Goff with 4:17 left in the game. @Patriots leading 10-3.

If you didn’t have it in you to start betting exact points scored by each team, you could have also taken home a nice profit by guessing the range of total points scored at BetOnline.

Whether you were lucky enough to hit any of these Super Bowl props, we hope you enjoyed the 2018 NFL season with us at SBD. I’d like to think we provided a little more entertainment value than Super Bowl 53.

No time to rest, though. We’re en route to Super Bowl 54!