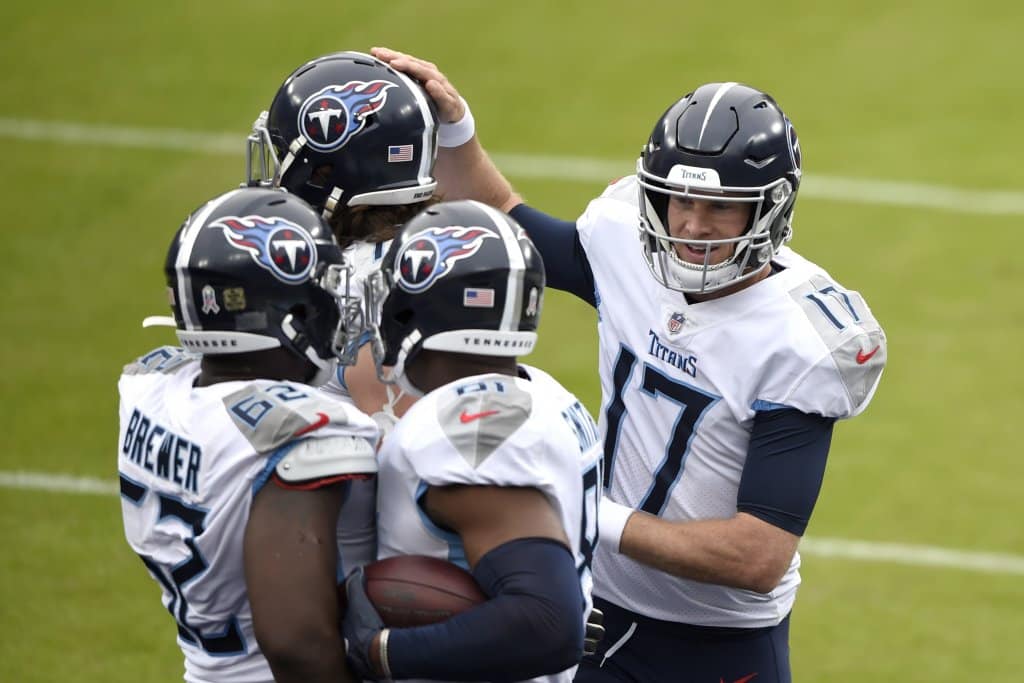 FILE – Tennessee Titans quarterback Ryan Tannehill (17) celebrates with teammates after he connected with tight end Jonnu Smith (81) on a touchdown pass against the Baltimore Ravens during the first half of an NFL football game in Baltimore, in this Sunday, Nov. 22, 2020, file photo. He may not be leading the NFL in passer rating again, but the veteran quarterback is proving he wasn't a one-year wonder with his new team as they prepare to host Detroit. (AP Photo/Gail Burton, File)

The Tennessee Titans have been one of the NFL’s most exciting teams since Ryan Tannehill took over at quarterback last season, and now a national audience will get to see this uberefficient offense at work, when they visit the Green Bay Packers in rare Sunday Night Football appearance.

The Packers offense is no slouch either, so points should be plentiful on a chilly, snowy night at Lambeau Field, as the Packers are the slight favorite. Which players will perform in a game both sides need for playoff positioning? Find out below!

The Packers run defense has done little in 2020 to rehabilitate their image after getting destroyed by the 49ers in the NFC title game. Green Bay is allowing 4.5 yards per carry and has been torched by some of the league’s best running backs; with Dalvin Cook racking up 226 yards at Lambeau and Alvin Kamara piling up 197 combined in Week 3.

Derrick Henry is basically matchup proof, topping 100 yards from scrimmage in five of his last six outings, including twice against a tough Colts defense. Even when the Titans fall in a big whole, Henry still gets a solid workload, so there shouldn’t be any worry about game script taking the ball out of his hands. Besides, I don’t want to see what happens to me if I recommend playing Henry’s under.

Derrick Henry must've got his superpowers a day early …

Look for the game’s best back to continue his run of dominance on Sunday night.

Aaron Rodgers has been unstoppable this season, regardless of his location. His command of the Packers offense has been next level, putting this cast of mostly unheralded receivers in a position to succeed week in and week out. But when it comes to raw numbers, his home cooking could use a little seasoning.

Rodgers is averaging 24 fewer passing yards per game at Lambeau this season versus on the road. The Pack haven’t faced any terrible weather at home this season, and have drawn some awful pass defenses as well, but for whatever reason, things haven’t been quite as explosive in Green Bay.

Packers get the win tonight at Lambeau Field but Aaron Rodgers said this about the offense after the game:

“It was a stinker for the offense…the third and fourth quarters. Our defense played well.”

In a game where the weather won’t be ideal for passing, where Tennessee could control the ball for a while and against a Titans D that Aaron Jones should find a fair amount of success on the ground against, I think Rodgers could have an excellent night and still come well short of his lofty passing yards total. Pick against the Packers passer in this spot.

A.J. Brown has found the end zone in nine games this season, including four of the Titans last five games. With Tennessee ranking second in the NFL in red zone touchdowns to only these Packers, expect the Titans to produce inside the 20 in this game, partly in thanks to their hulking receiver.

Look for Brown to find pay dirt at least once against this Packers so-so secondary, and put a little on that score coming first.