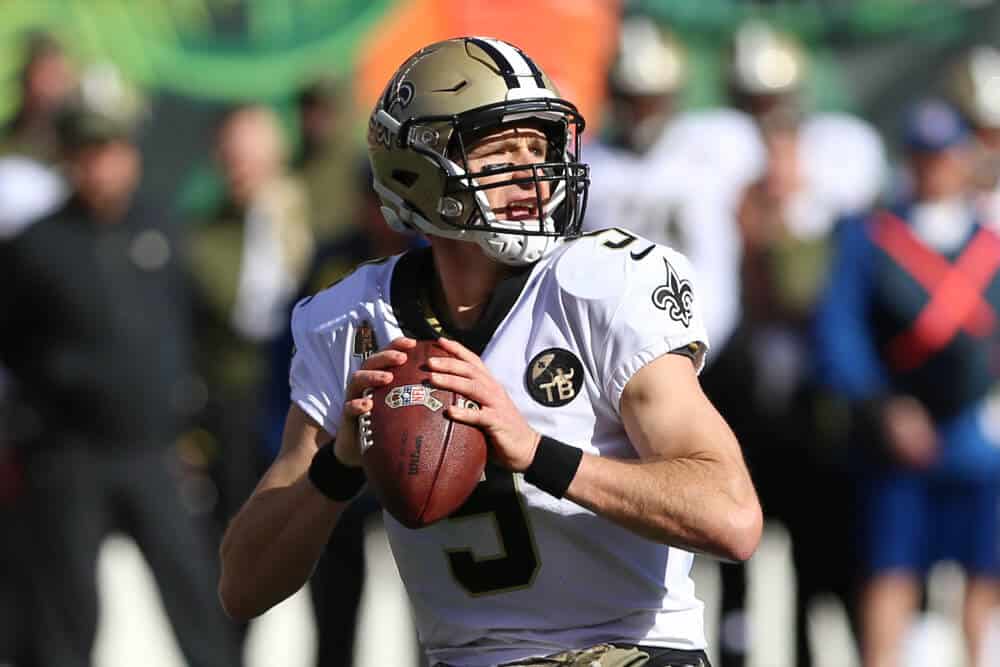 Can the New Orleans Saints maintain top spot in the NFC South while Drew Brees is out? Photo by Ian Johnson/Icon Sportswire.

The New Orleans Saints suffered a bad break on Sunday when starting quarterback Drew Brees was knocked out of the game against San Francisco.

On Monday, reports surfaced that Brees suffered multiple broken ribs on both sides of his chest and a collapsed lung. Even with Brees expected to miss several weeks, the Saints’ odds to win the NFC South haven’t changed.

Is there any value betting the Tampa Bay Buccaneers?

Brees Out But Who Starts in His Stead?

The is no definitive timetable for how long Brees will be out, although early estimates are two to three weeks. Remember, some players are able to play through rib injuries. It doesn’t look like Brees will – especially since he’s no longer a young sprite at 41 years of age – but there is no concrete answer on how long he’ll be out.

Saints’ QB Drew Brees has multiple rib fractures on both sides of his chest and a collapsed lung on the right side, per @WerderEdESPN.

The assumption all season long was that, if the Saints were to lose Brees for any period of time, Jameis Winston would step in as the starter. But after his performance in relief on Sunday, that’s now a question mark. Winston entered in the second half against the 49ers and took a pair of sacks and threw what should have been an easy interception.

On Monday, head coach Sean Payton declined to announce a starting quarterback, which is not a good sign for Winston. The team also has Taysom Hill, who is technically a quarterback but is often used as a gadget player. He might be the better choice for the Saints than the turnover-prone Winston.

One of the reasons why we haven’t seen the NFL divisional odds in the NFC South change all that much is because the Saints have a breeze of a schedule over their next four games. They’ll face the Atlanta Falcons twice and then they’ll also play the Denver Broncos and Philadelphia Eagles. Those three squads are all three-win teams.

From The Aftermath: The #Saints aren't planning to put QB Drew Brees on Injured Reserve, leaving open the possibility that he'll be back in 3 weeks. But as of now, Brees is set to miss multiple starts. An audition for Jameis Winston or Taysom Hill or both. pic.twitter.com/RXv6KvbbxL

The Saints have survived without Brees before; last season, they didn’t lose a game with Teddy Bridgewater filling in as the starter. The Saints now have a pair of options who should be able to keep the team afloat for the time being.

Bucs Are Essentially Two Games Back

The Bucs are currently at 7-3 while the Saints are at 7-2. The issue for the Bucs is they’ve been swept by the Saints in the season series, so they will need to finish one-win better than the Saints to win the division.

Many people are pointing to the Bucs schedule as the reason why they’re not likely to make up the ground but for the most part, it’s not too bad. Both teams still have two games against Atlanta, both teams will face Minnesota and both teams will face Kansas City. The difference is in the other two contests.

The Bucs will host the Los Angeles Rams this week and also face the Detroit Lions. Meanwhile, the Saints will face the Eagles, Broncos and Carolina Panthers. While that might be tough to track in the mind, the bottom line is the Saints have the inside track because they don’t have to face the Rams and they have one more game.

There’s no value betting the Saints at this point because laying -220 with Brees out is a risk. Sure, the schedule is easy, they have backups who can get the job done, and they should – emphasis on should – end up on top. However, -220 feels like the right price if the team was fully healthy and they’re not.

Is there value with the Bucs? It’s a tough call but it looks like it. It mostly hinges on how you think they’ll fare against the Rams this weekend and how you believe the Saints will fare without Brees or with a limited version of him.

A small flier on the Bucs feels right here.