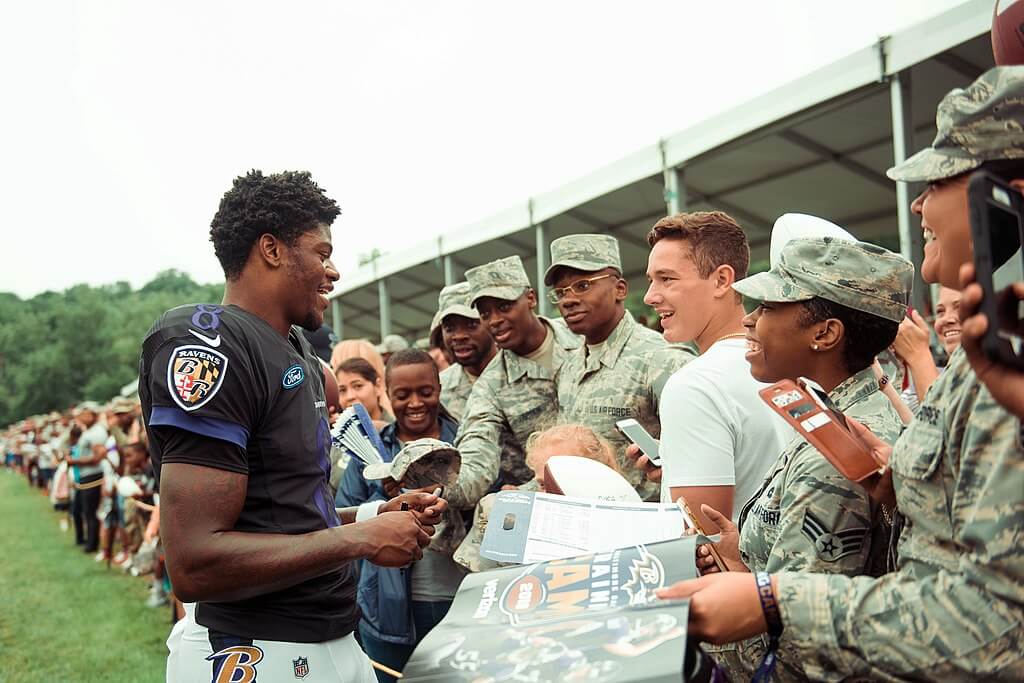 Joe Flacco has been traded by the Ravens to the Broncos, leaving Lamar Jackson as the starter in Baltimore. Photo by US Air Force Staff Sgt Delano Scott [Public Domain].

But man, do they ever tell a story for Joe Flacco.

Since the season ended with another Patriots Super Bowl win, Baltimore’s Super Bowl 54 outlook held steady at +3200 … until today, when the Ravens dealt the 2012 Super Bowl MVP to the Broncos.

The #Broncos are sending a mid-round pick to the #Ravens for QB Joe Flacco, source said. Baltimore gets back solid return for a QB they replaced mid season.

In dealing the veteran pivot, Baltimore moved to just outside the top 10 in Super Bowl 54 odds. Let’s see if unloading their once-precious cargo is now worthy of a wager.

After an electric career at Louisville that included winning the Heisman Trophy in his sophomore season, the Ravens plucked Lamar Jackson at the end of the first round in 2018, with the intention of grooming him under Flacco.

That plan lasted until Flacco hurt his hip, and Jackson got his first start following the Ravens’ Week 10 bye.

It’s not like Flacco was lighting the league on fire, anyways. He had his lowest completion percentage in five years, while also averaging a paltry 6.5 yards per pass attempt.

The Proper Way to Calculate 2018 NFL Strength of Schedule

The Ravens added passing threats like John Brown, Michael Crabtree, and Willie Snead in the hopes it would spur Flacco to stretch the field. While it started off well, he regressed back to the ineffective style that had become the epitome of the Ravens offense, and they were a lifeless 4-5.

Jackson was as raw as any QB to enter his first career start, but his athleticism masked most of his passing deficiencies.

In the pass-happy NFL, Jackson paced the league’s heaviest rushing attack at 229.6 yards a game under his guidance, leading Baltimore to a 6-1 finish to win the AFC North crown.

Personally, he finished the year with 695 yards rushing, a healthy 4.73 yards a tote. He rushed for better than 75 yards in five of seven starts. He also had 1,201 yards passing and 6 TDs.

Even with Flacco ready to return after a month on the shelf, Jackson would be the starter the rest of the season.

Lamar Jackson better be the guy the Ravens hope he can be.

Are the Ravens Worth Wagering On?

While it was a mutual love fest between the new starting QB and the fans in the regular season, the tune changed swiftly and dramatically in the Wild Card game against the Los Angeles Chargers.

Jackson was sacked seven times and looked every bit the 21-year-old he was in his playoff debut.

He finished the game 14-for-29 for 194 yards with two touchdowns and an interception, but those numbers are masked by two late scores in what could have been the worst playoff performance by a rookie QB.

Nearing the midway point of the fourth quarter, Jackson had just 25 yards passing, three completions, and a passer rating of zero.

It was so bad that the fans were screaming for Flacco to enter the game.

Baltimore will only go so far as their young signal-caller takes them. If Jackson can bring his passing ability to even NFL average, the Ravens are a dark horse bet for the Super Bowl. The ability is definitely there.

If you’re looking for the best value bet, I like that New Orleans (+1000) has a finite Drew Brees window to compete with, and a world-size chip on their shoulder after getting jobbed in the NFC Championship.