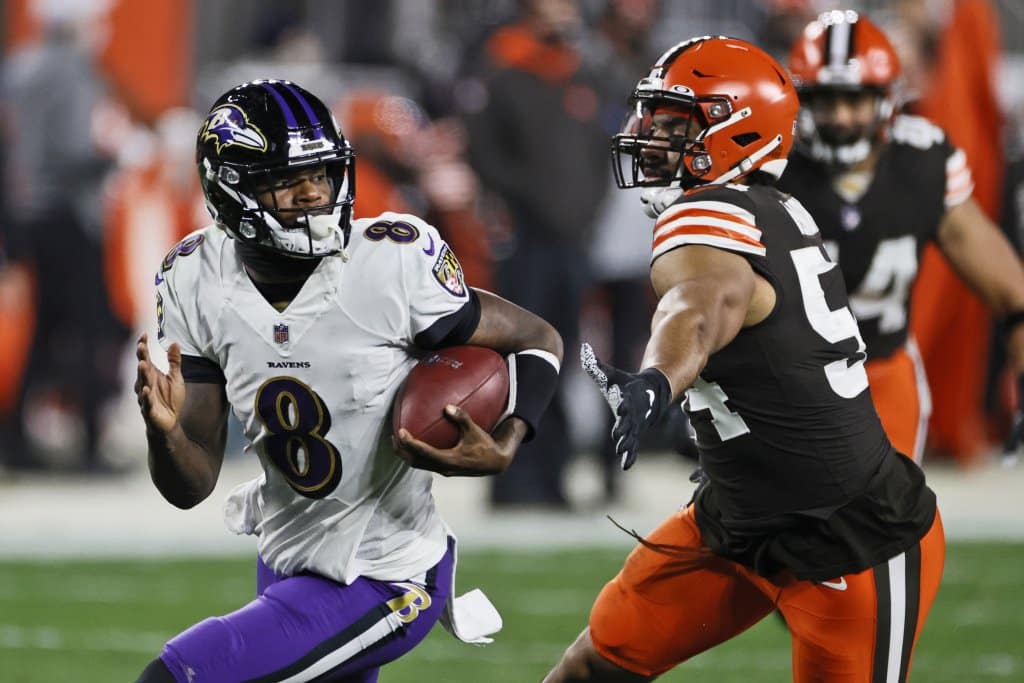 Baltimore Ravens quarterback Lamar Jackson (8) rushes during the first half of an NFL football game against the Cleveland Browns, Monday, Dec. 14, 2020, in Cleveland. (AP Photo/Ron Schwane)

After throwing everyone off their scent midway through the season, it appears the Baltimore Ravens are back in the championship conversation. Baltimore beat division rival Cleveland on Monday Night Football for the second time this season, improving to 8-5 and moving into a tie with Miami for the AFC’s final playoff spot.

The Dolphins remain ahead of the Ravens based on tie break scenarios, but projection models now give Baltimore an 86.5% chance to make the postseason. That’s enough to cause a massive shift in their Super Bowl prospects, as the Ravens price was significantly shortened following their victory on Monday night.

Baltimore’s Super Bowl odds are now +1700, after beginning the week as long as +2600. Their price is twice as short as Cleveland’s and over four times as short as Miami’s, two of the teams they’re competing with for a Wild Card berth.

The victory over the Browns wasn’t short on drama as the Ravens coughed up a two-touchdown lead in the 4th quarter with Lamar Jackson briefly sidelined, and appeared on the verge of blowing the game until Jackson triumphantly returned.

Game of the Year

With Baltimore leading 34-20 in the 4th, Lamar was seen bolting to the Ravens locker room.  He was reportedly dealing with “cramps”, but in his absence Cleveland rallied to score on back-to-back drives, while the Baltimore offense proceeded to go 3-and-out twice.

Now down 35-34 with two minutes remaining, and facing a 4th-and-5 from midfield, Lamar came racing back onto the field to save Baltimore’s season. He hit a wide open Marquise Brown for a 44-yard score, and after the Browns scored on the ensuing drive, Lamar marched the Ravens down the field to set-up the game-winning field goal.

GAME. OF. THE. SEASON. 🔥 pic.twitter.com/IN42ixuHvI

Jackson finished with 163 yards passing and a score, while rushing for 124 yards and two TD. Baltimore’s run game looked as dominant as it did in 2019, as they finished with 231 yards and four rushing scores.

If there’s a reason to be concerned, it’s on defense, as that unit gave up a season-high 42 points. It’s just the second time all year an opponent has eclipsed 28 points against them, but they offered little resistance against Baker Mayfield and company. They entered the game as the league’s fourth best scoring defense, but gave up 493 total yards on the night and failed to record a sack.

The Most Favorable Remaining Schedule in the League

Eight of the Ravens’ first 13 games have come against teams that appear destined for the postseason, so it only seems fair that they get a break down the stretch. Baltimore’s remaining three contests are versus Jacksonville, Cincinnati and the New York Giants, three teams with a combined record of 8-30-1.

I still wouldn't be shocked if the Ravens won the AFC. Guts. Pride. Physicality. Tradition. Lamar … but first of course, they have to fight their way into the playoffs.

Compare that to Miami, who still have New England, Las Vegas and Buffalo on its schedule, or Cleveland or Indianapolis, who still have to face Pittsburgh, and its easy to see why the Ravens playoff prospects are so high.

Once the postseason tournament starts, we’ve seen that anything can happen, and Baltimore has all the ingredients to make a deep run. They rush the ball better than almost anyone, they’re strong on defense, Monday night notwithstanding, and they boast excellent special teams.

Lamar meanwhile, is a nightmare to prepare for, and as long as he stays healthy, the Ravens will be live in the Super Bowl futures market.

If Baltimore runs the table, and they probably should, they’ll likely finish as the 5th or 6th seed in the AFC. That would most likely set up a Wild Card Weekend matchup with Buffalo or one of Tennessee or Indianapolis, and there’s no reason to believe they couldn’t advance to the Divisional Round.

Of course from there the road would likely go through Kansas City, but if there’s a team that could challenge the Chiefs it just might be the Ravens. Baltimore could control the clock by pounding the rock, and even though an upset seems unlikely it’s not completely out of the question.

Don’t forget this team was +467 to win it all after Week 1, and even though they’ll face an uphill climb, their number is only going to get shorter if they win their remaining three games. If you’re bullish on Baltimore, now is the time to act.