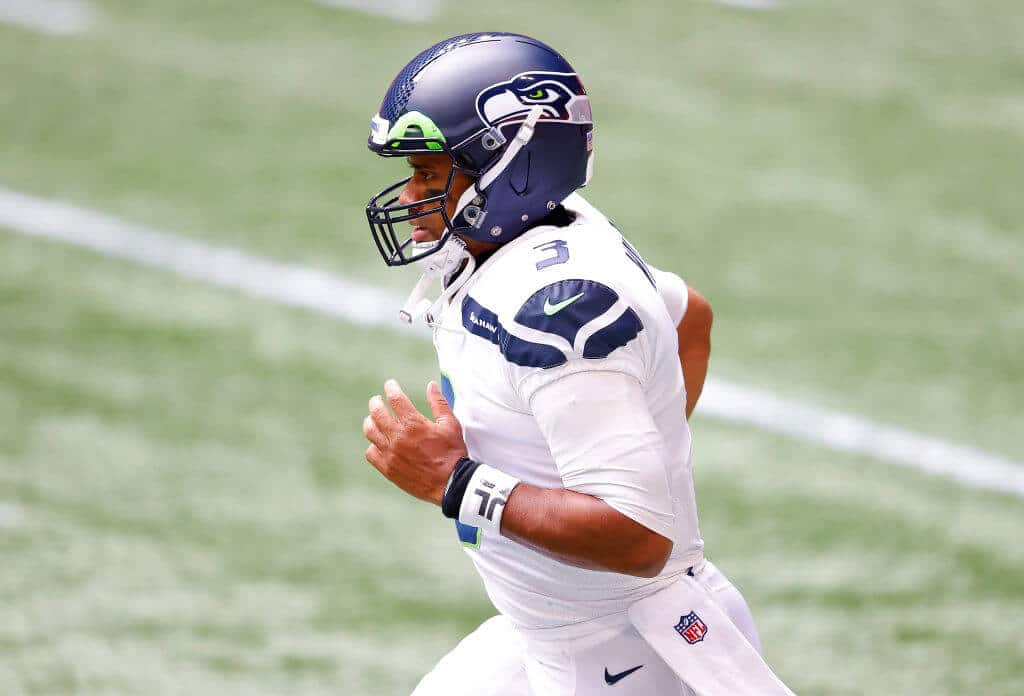 Russell Wilson will be looking to build on a spectacular Week 1 performance that earned him NFC Offensive Player of the Week honors when his Seattle Seahawks host the New England Patriots on Sunday Night Football.
Photo by @PFF (twitter)

The New England Patriots will see an impressive streak of 64 straight games pegged as betting favorites come to an end when they visit the Seattle Seahawks on Sunday Night Football as 4-point underdogs on September 20th at 8:20 PM EST on NBC.

The Patriots head west after opening their campaign with a 21-11 win over the Miami Dolphins, while the Seahawks return home to CenturyLink Field after marching to a decisive 38-25 victory in Atlanta last weekend.

Odds taken on Sept 20 at DraftKings.

Cam Newton will be aiming to build on his successful Patriots debut last weekend. The 31-year-old veteran used his arm sparingly, connecting on 15-of-19 pass attempts for just 155 yards and no scores. However, Newton showed that he could still scramble with the best of them, carrying the ball 15 times for 75 yards and a pair of touchdowns.

Patriots QB Cam Newton was accurate on 15 of his 16 qualifying throws today against the Miami Dolphins. pic.twitter.com/fojMKk41d8

The challenge now facing Newton and the Patriots is to diversify their offensive game plan and get more out of the passing game against a Seahawks defense that effectively shut down the Falcons rushing offense last weekend. Seattle limited the Falcons to just 72 rushing yards, with Todd Gurley accounting for 56 yards and one score.

The Seahawks surrendered 434 passing yards last weekend, and their pass defense ranked 27th last season, allowing 263.9 yards per game. However, Newton has produced mixed results against Seattle, connecting on more than one TD pass just twice in eight career meetings with the Seahawks, and averaged fewer than 200 passing yards over his past three.

Wilson Expected to Back Up Big Boast

At the other end of the gridiron, Seahawks quarterback Russell Wilson will be looking to back up his claim to be “the best quarterback in the NFL” as he attempts to lead the squad to back-to-back wins.

Wilson backed up his boastful words with a spectacular performance in Atlanta last weekend, tossing for 322 yards and four scores, while also leading all Seattle rushers with 29 yards.

Without a doubt, Russell Wilson is the best QB in the league 💪 pic.twitter.com/bVYwzsGScJ

With Wilson in vintage form, the Seahawks sport the offensive ability to beat opponents in multiple ways. That has contributed to the point spread moving to -4 after opening with Seattle favored by 3, as well as a slight climb in the total, which opened at 44.0 in the Patriots vs Seahawks odds. Add to that the recent history between these two teams, and there is plenty on the line for Wilson and the Seahawks for a Week 2 contest.

The Seahawks have topped New England in two of their last three meetings, with the glaring exception being the Patriots’ 28-24 comeback victory over Seattle in Super Bowl 49.

While that defeat remains a sore point for Seattle, even with the recent departure of Tom Brady from New England, the Seahawks have been steady performers against the Patriots in the regular season during the Wilson era.

The Seahawks have won and covered in their past two regular-season dates with New England, with Wilson tossing six total scores and averaging over 320 passing yards in those contests.

Seattle has also been a steady performer in recent appearances on Sunday Night Football, particularly on home turf, with last season’s 26-21 loss to the visiting San Francisco 49ers in Week 17 ending a four-game SU win streak that included a lopsided 40-7 victory over Newton and the Carolina Panthers back in 2016. Conversely, the Patriots have struggled in recent SNF appearances on the road, losing three straight, capped by defeats in Houston and Baltimore in the second half of last season.

Injuries a Concern for Pats

And while the Patriots pass defense looked impressive last weekend while intercepting Dolphins passer Ryan Fitzpatrick, an array of injuries on both sides of the ball present them with a massive task to both shutdown Wilson and also generate enough offense to get past the Seahawks. Among the wounded are receivers Julian Edelman and N’Keal Harry, who are both listed as questionable, joining linemen Adam Butler and Brandon Copeland.

While a matchup between Wilson and Newton has the potential to be high-scoring and entertaining, this time around it is more likely to be remembered for exposing the Patriots’ weaknesses on both sides of the ball that Newton simply will not be able to make up for singlehanded.