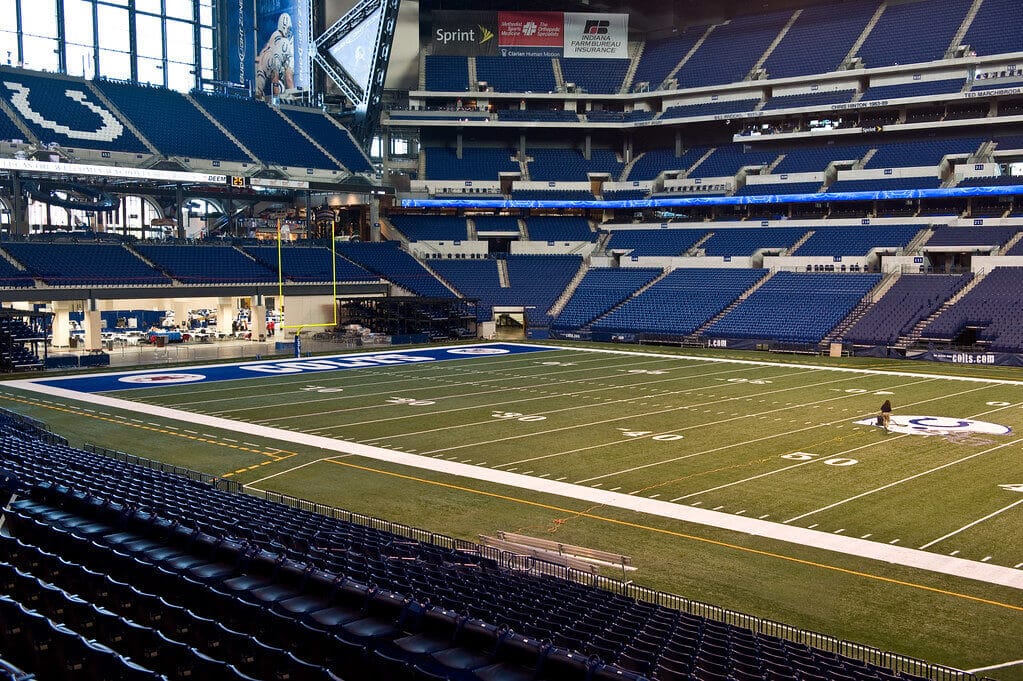 Who will run the fastest 40-yard dashes when the NFL Scouting Combine is held at Lucas Oil Stadium in Indianapolis? Photo by Jacob Hallett (Flickr)

Stop the clock. BetOnline is out with total wagers on 40-yard dash times at the upcoming NFL Scouting Combine for a number of the leading prospects eligible for the 2020 NFL Draft.

Oklahoma quarterback Jalen Hurts is one of the wild cards for the NFL Draft. Is his 40 time going to positively or negatively impact his draft status?

Check out all the 40-yard dash lines for these and other top NFL Draft contenders right here.

The NFL Scouting Combine is slated for Feb. 23rd-March 2nd at Lucas Oil Stadium, home to the Indianapolis Colts.

Ruggs was playing at Alabama in the shadow of Jerry Jeudy, projected to be the first wide receiver selected in the draft. Regardless, he can’t be overlooked when it comes to burning up the track. He’s expected to turn in the fastest 40-yard dash time during the NFL Scouting Combine.

In fact, BetOnline is offering a separate prop involving Ruggs. That bet is asking who will run the fastest 40 between Ruggs and TCU wide receiver and fellow speed demon Jalen Reagor. Ruggs is the -400 chalk in this wager.

My WR3 of the 2020 class: Henry Ruggs III. He has that elite 4.2-speed that Al Davis would have traded the house for. Very impressive hands at the point of attack and he can really elevate for the football. Think he’ll be a star at the combine. #Raiders pic.twitter.com/GuViYcGVbu

The Crimson Tide held a junior pro day for NFL scouts a year ago. Ruggs produced a 4.25-second 40. Jeudy indicated later that Ruggs hit that time despite a bad start. On the track, Ruggs has run a 10.42-second 100 meter sprint.

Daniel Jeremiah of the NFL Network projected that Ruggs will turn in  a sub 4.3-second 40. There’s some speculation that he could make a serious run at the NFL Combine 40 record of 4.22 seconds set by Cincinnati Bengals wide receiver John Ross in 2017.

Ole Miss safety Zedrick Woods ran the fastest 40 at last year’s combine. He turned in a 4.29-second 40, the fastest ever by an SEC player.

Ruggs is expected to shatter that mark but how low can he go?

Football scouts describe Buckeyes weak-side defensive end Young as a freak of nature. They insist that he’s so quick off the ball that he moves before the offensive linemen are out of their stance.

Former Ohio State teammate Nick Bosa compares Young to NFL edge rushers Khalil Mack and Von Miller. He’s viewed as a generational talent. Young’s so quick afoot that he can drop off the defensive line and into pass coverage on a receiver.

It’s his explosiveness off the ball that makes Young such a dangerous defender. That’s also why many scouts believe that his 40 time at the combine will be faster than some who play offensive skill positions.

Hurts Must Be So Good

Players on the bubble can make or break their draft status via a strong combine performance. One of the guys who falls into that category this year is Oklahoma quarterback Jalen Hurts.

The 2019 Heisman Trophy runner-up ran a 4.48-second 40 while at Alabama prior to transferring to Oklahoma but that time is believed to have been hand timed.

Viewed as a mid-round pick in the NFL Draft, Hurts could improve his status with an impressive performance at the combine.

Play The Slowdown Game With These Guys

Every player at the combine will feel the need for speed. But they all won’t find it.

Here are a few value bets on the board on whom you should bet the over for their 40 times.