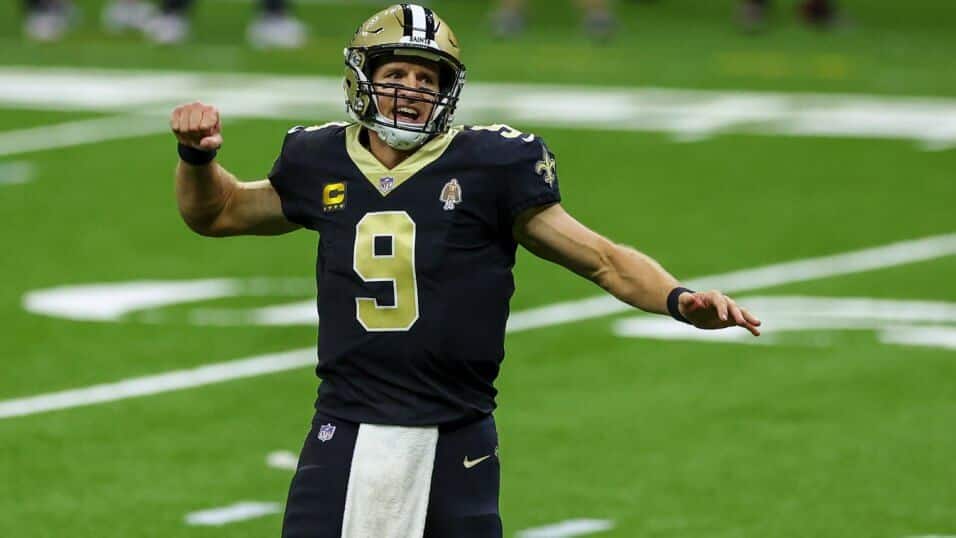 Drew Brees and the New Orleans Saints are the favorites to be the NFL's last unbeaten team.
Photo from @AthleticEd (Twitter)

Sixteen teams started the season on the right foot by getting a win in Week 1. There were some surprises in that bunch (welcome to 1-0 Washington and Jacksonville!) but, for the most part, all the teams at the top of the preseason power rankings got it done.

Now its time for the fun discussion: Which of these teams can keep it up the longest? Will any of them threaten the 1972 Dolphins?

The latter question may not be answered for months, but we have a good idea about the former. FanDuel already has odds for who will be the last remaining undefeated team in the NFL, and somewhat surprisingly it’s not the reigning champion Kansas City Chiefs topping the list.

Odds to Be Last Undefeated NFL Team in 2020 Season

Over the last decade, the final undefeated team has averaged 7.6 wins before their first loss. Which team is best set up to hit that number?

Kansas City picked up right where they left off in 2019, looking dominant on offense and shutting down the Texans aerial attack, in their 34-20 romp over Houston. Dating back to last season, the Chiefs have won 10 straight and they still have room to improve.

Will the Chiefs go undefeated this season?@danorlovsky7 thinks so 😳 pic.twitter.com/v6qFLWtMzT

But while KC looks like the best team in the NFL, the schedule makers didn’t do them any favors to start the year, which is a big reason the Saints are the favorites in this prop. Both teams rank near the bottom in NFL SOS after Week 1, but the Chiefs have a few notable names on the horizon.

The upcoming schedule will really challenge KC’s achilles heel of a run defense, and games against the Ravens, Patriots and Bills could all be close ones.

Getting them at +450 to survive that gauntlet isn’t great value compared to some of these other teams.

Can New Orleans Keep It Going?

The Saints may be listed as the favorites for the foreseeable future, but bettors can’t feel great about this team staying unblemished in the loss column after an uninspiring Week 1 effort. New Orleans defense and special teams carried them to a win on an afternoon where Drew Brees and the offense couldn’t get anything going downfield.

Brees managed just 3.2 average air yards completed in an outing that Sean Payton called “probably as bad of a game as I have had as a playcaller.”

When the Saints passing game has struggled in the past, they could always rely on the Brees to Michael Thomas connection to get things going, but that call won’t be answered in the next few weeks.

From @GMFB: If it were most other players, #Saints WR Michael Thomas would be ruled out with a high-ankle sprain until the Week 6 bye. But Thomas is not normal and will fight to get on the field. pic.twitter.com/YtRcAaii2E

The upcoming schedule doesn’t appear too daunting outside of a Week 3 clash with the Packers, but Sean Payton’s squad is susceptible to stinkers in September. The Saints haven’t gone undefeated in the first month of the season since 2013. I’d want a little better than +400 if you’re banking on this year’s team to buck the trend.

After pulling off a Week 1 upset over the reigning NFC Champs, Arizona is a sneaky good longshot to be the last unbeaten.

Deandre Hopkins went absolutely OFF in his Cardinals debut 😳

Coming into this weekend as touchdown favorites over Washington, the Cardinals won’t be underdogs again until a Week 6 Monday night game in Dallas. By that point, the list of remaining undefeated teams will be scant: along with some of the clashes mentioned above, games like Seahawks-Patriots (Week 2), Rams-Bills (Week 3) and Steelers-Titans (Week 4) will self-cannibalize the field.

Last year’s final unbeaten squad was the surprising San Francisco 49ers, who capitalized on an easy early schedule before falling in Week 10 to Seattle. With the fifth-easiest schedule this season, Arizona is well-positioned to follow their division rival’s path.