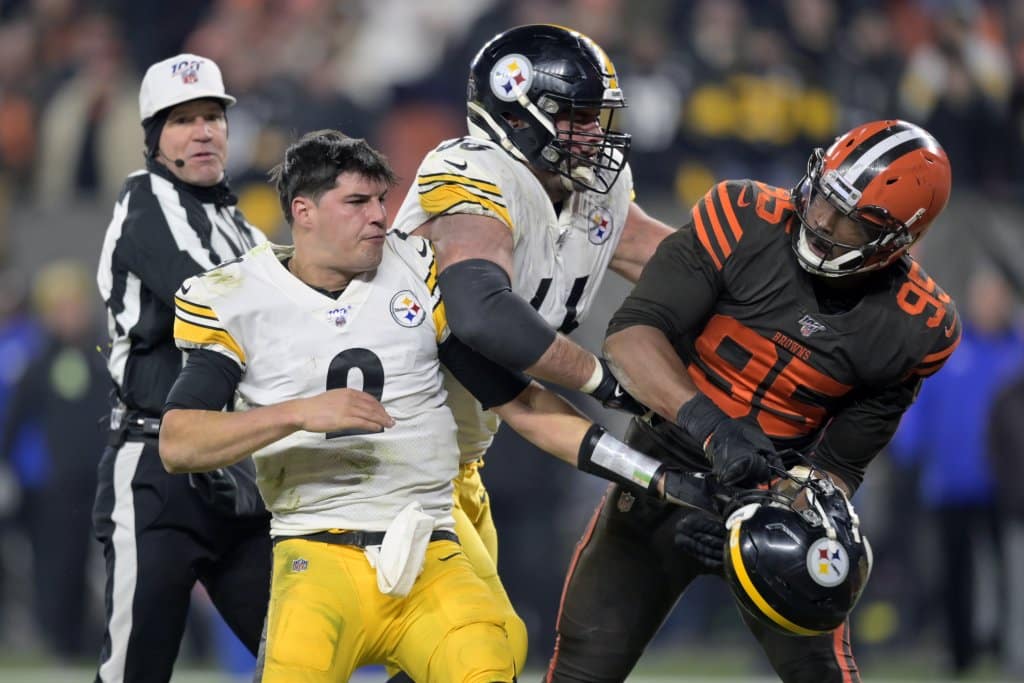 FILE – In this Thursday, Nov. 14, 2019, file photo, Cleveland Browns defensive end Myles Garrett (95) reacts after swinging a helmet at Pittsburgh Steelers quarterback Mason Rudolph (2) in the fourth quarter of an NFL football game in Cleveland. The Browns (10-5) will make the postseason for the first time since 2002 with a win over the Steelers. Pittsburgh, which clinched the AFC North last week, is resting quarterback Ben Roethlisberger and will start Mason Rudolph, who has a history with Cleveland's Myles Garrett after an ugly helmet-swinging incident a year ago. (AP Photo/David Richard, File)

It’s finally here! Even though some of the games were played by fifth-string QBs, TEs turned wide receiver or on random Wednesday afternoons, the NFL made it through this crazy season to Week 17. And thanks to that rigid refusal to push games back, this will be the final week of the 2020 regular season. So we’d better make it count! (Not like last week.)

Exploring the Week 17 odds, we’re going to stay away from games with no real stakes, since they’re way too unpredictable. Instead, we’re going to focus on some crucial games that will decide playoff participants. Because when all the pressure is on one side, most of the money tends to be as well. And that’s where we’ll find some value.

Blowing It Would Be So Browns

Let’s be real Browns fans: you kind of expect your team to lose this game. Even before more positive COVID cases started popping up in Cleveland’s facility and put some of the team’s better defenders on the sideline, you had to think that losing to Pittsburgh’s backups as 9.5-point favorites with the playoffs on the line would be Brownsiest move possible.

Cleveland just isn’t allowed to have nice things. A win would give the franchise their best regular season since returning to the mistake by the lake. Their previous best season? A 10-6 effort in 2007 where they also missed the playoffs in a loaded AFC.

Now, a year removed from Myles Garrett’s helmet attack on Mason Rudolph, the Steelers backup QB has a chance to end yet another Browns season in Week 17. The stars are all aligned for a heartbreaking loss to rival Red Right 88, the Drive and the Fumble.

Kevin Stefanski says Myles Garrett will be the #Browns game captain this week. Says it’s “a big game” and he’s “the big guy” and it has nothing to do w/ the helmet swinging incident vs the #Steelers and Mason Rudolph a year ago.

There’s more reasons than just the Browns sad history to not like Cleveland in this spot. Week 17 often sees teams in must-win games get inflated lines against opponents with little to play for. And at least once every year, the team with “nothing to play for” wins outright and ruins everything.

These very Steelers were in the opposite position last year, needing to beat Baltimore’s backups to get into the playoffs. They choked.

The Ravens continue to beat down the rival Steelers with their backups! #RavensFlockpic.twitter.com/7PUdezuJwo

The Ravens did it in 2017 against the sub-.500 Bengals. Kirk Cousins has done it twice, including once in 2018 when Stefanski was coordinating the offense. Ryan Fitzpatrick and the 10-win Jets blew it in Buffalo in 2015 with a postseason berth on the line. The common thread? Unreliable quarterbacks in big spots.

If you’re a Baker Mayfield skeptic, why not take three-to-one odds on a meltdown in a massive moment?

The Washington Football team is giving 3.5 points in Philly with their playoff lives on the line. Alex Smith should be back, to elevate Washington’s offense from complete trainwreck to passable. The Eagles are also sitting a bunch of recognizable names. Is that enough reason to back Ron Rivera’s team to get it done here?

Another reason to not undervalue a team with “nothing to play for” is that players always have a motivation to perform. With no preseason this year, Sunday will be some guys only chance to put their play on film for the upcoming offseason. For Philly, Jalen Hurts wants to cement his case that he should be the starter next season with a convincing win in primetime.

The Eagles offense has been more effective since Hurts took over, partly because the rookie is willing to take off if his initial read isn’t there. In these team’s Week 1 meeting, Carson Wentz took eight sacks. Don’t expect that insane kind of production from the front four this time around.

Last time we played Philadelphia we

We’ve spent all year making jokes about how terrible the NFC East is. Now that it’s the eleventh hour and Washington is poised for a modicum of success, you’re suddenly going to trust things to play out as expected?

Join me on the side of chaos. Take the Eagles.

The Arizona Cardinals are three-point favorites in Los Angeles in a rare “both teams have to have it” Week 17 game. The Rams squandered a clear path to the playoffs with that huge upset by the Jets in Week 15, and now they’ll need John Wolford (or some help from the Packers) to ensure they’re in the NFC’s final seven.

Though it’s a big spot for a backup QB, Jared Goff’s absence from the offense might not be a huge negative based on his recent performance.

Rams/Cardinals injury report ahead of Week 17 game. FWIW, you’ll not see Kupp or Brockers on here because they had a COVID/reserve designation prior to scheduled injury report designation. pic.twitter.com/RsWex86vYf

From what little we know of the former Arizona Hotshots QB, John Wolford has superior mobility to Goff. He’ll be more likely to take off when nothing is there on a bootleg, rather than just tossing the ball to the other team. It’s a new wrinkle I’m sure Sean McVay is eager to explore against the Cardinals, even with a surge of injuries hamstringing his offense.

Meanwhile, Arizona’s starting QB will be playing, but Kyler Murray is far from 100-per cent. As bumps and bruises pile up for the Cards QB, it impacts the overall effectiveness of Arizona’s offense. Because, as it turns out, Murray’s athleticism hides the fact that Cliff Kingsbury isn’t scheming up a great offense this season.

Which is kind of the opposite of the air raid philosophy of getting good at running a limited number of concepts?

Arizona has been an unreliable bet all season, going just 5-5 straight up as a favorite.

In a loser-leaves-town spot, I’ll take a Rams defense loaded with veterans and an offense schemed by McVay rather than trust Kingsbury and these unproven Cards.