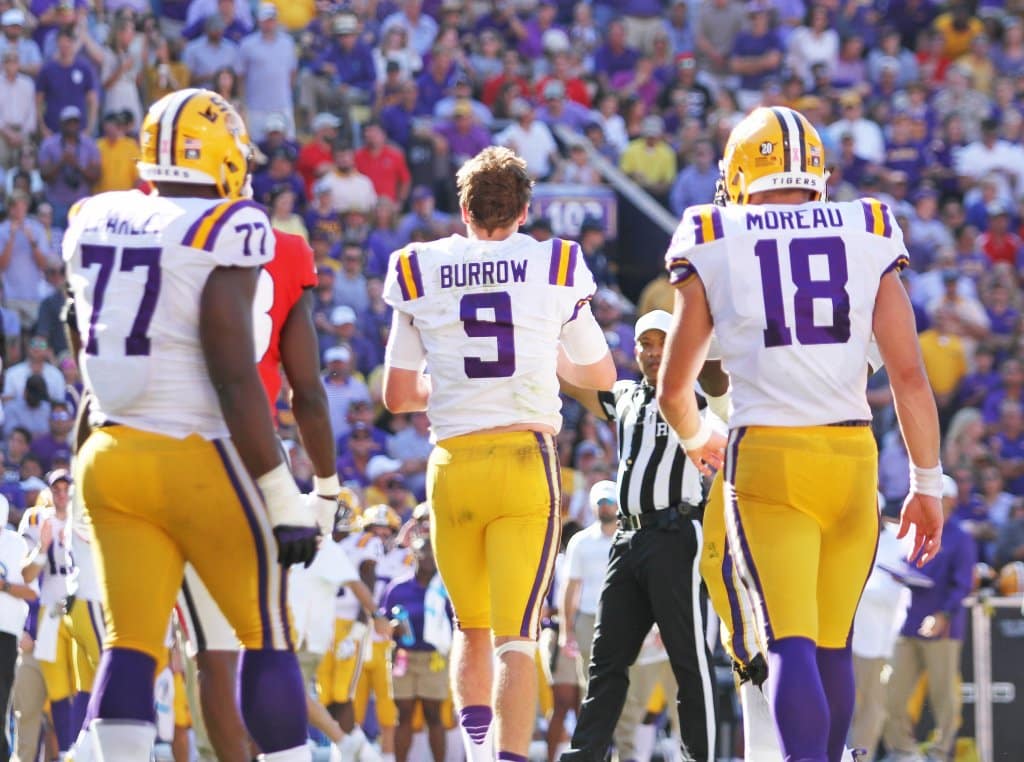 Joe Burrow is now the heavy favorite to be the No. 1 pick in the 2020 NFL Draft. Photo by Tammy Anthony Baker (Flickr) [CC License].

All season long, the worst NFL teams were supposed to be ‘Tanking for Tua’. However, given the emergence of LSU quarterback Joe Burrow and the hip injury to Alabama quarterback Tua Tagovailoa, it’s Burrow who is now favored to be the top pick in the 2020 NFL Draft. Who is the best bet to be selected first overall next year?

Burrow Has Emerged as a Star

The progression of Burrow has been nothing short of jaw-dropping these last couple of years. He’s gone from a backup at Ohio State to a transfer at LSU that might give their passing game a spark to becoming the best quarterback in the country. The season he’s put together is Heisman Trophy-worthy as the numbers are quite staggering.

Burrow has 3,867 passing yards with 38 touchdowns and just six picks. What’s more impressive is how he’s cut through the top competition, as he has a combined 15 touchdown passes versus just two interceptions against Texas, Florida, Auburn and Alabama – all teams that were ranked in the Top 10 at the time.

With Tagovailoa suffering what appears to be a serious hip injury, and Justin Herbert and Jake Fromm having good-but-not-great campaigns, Burrow is now the top quarterback that will be targeted in the 2020 NFL Draft. His odds have continued to shorten to the point where he is now the -200 favorite to be the first name off the board.

Who is the Competition?

When you take a look at the options in this prop, it’s either Burrow, Ohio State defensive end Chase Young or Georgia Bulldogs tackle Andrew Thomas. Quarterback is typically the most valued position but the other two players on this list are absolute studs as well.

Young is pretty much the only defensive player in the country who has been in the conversation for the Heisman Trophy. He has 13.5 sacks in just eight games and has also picked up 22 tackles and five forced fumbles. He’s been nearly unblockable as he’s spent most of the season disrupting opponents in the backfield.

As for Thomas, he’s viewed as one of the top offensive linemen in the country. He was named the Outland Trophy Player of the Month in October (awarded to the top lineman) as he’s part of a unit that’s been impenetrable. Georgia has allowed just six sacks all season, which is the third-best mark in the country.

Who’ll Have the Top Pick?

Of course, a big factor in who’ll go first overall is which team will be drafting. As of right now, it’s the Cincinnati Bengals. They selected quarterback Ryan Finley in the fourth round last season and also have Andy Dalton on the roster. Neither seem like long-term answers but the team might have more pressing needs.

If the Washington Redskins or New York Giants end up with the top pick in the draft, it’s not likely either of them are interested in a quarterback after drafting one in the first round last year. As for the New York Jets, they appear to be set at the position too.

So that leads me to pass on Burrow here – especially given that you have to lay this type of juice. I’d actually take a flier with Thomas as so many teams at the top of the draft need help along the offensive line and might be set at quarterback.

Also keep in mind two other points: we haven’t gone through the combine process and teams will see value in a number of other quarterbacks in the draft. With the first point, while Burrow has looked great this season, who knows how he’ll measure out. Maybe he drops a bit if his measurables aren’t great. He was originally viewed as a Day 3 pick.

Secondly, there are a number of quarterbacks offering value in this draft as guys like Herbert and Fromm have been bandied about as being the top pick but both will now go later. The same goes with Tagovailoa, who should fall a little bit.

That could be a factor here because the Bengals may decide to trade back a few spots and take Herbert or maybe they take Thomas and then trade back into the first round later to land Tagovailoa or Fromm. At any rate, I would bet on Thomas here as I think the Bengals can rebound much faster if they fix their offensive line and keep Dalton.