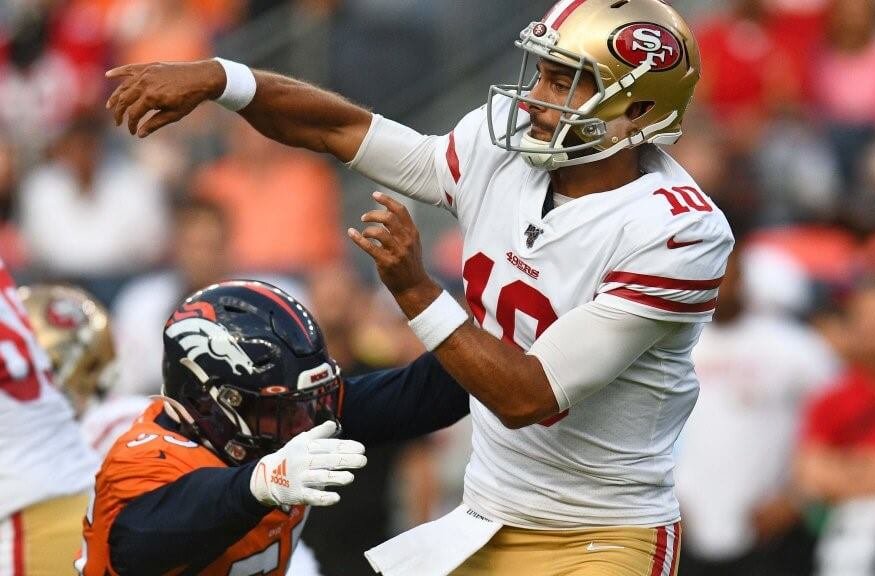 If you’re wondering what rust looks like, hopefully you tuned into the performance of 49ers pivot Jimmy Garoppolo on Monday night.

It was the first competitive football environment he’d seen since shredding his knee in Week 3 of last NFL season.

And despite a showing that would make Nathan Peterman look like Tom Brady: 1-for-6 passing for 0 yards, 1 interception and a 0.0 QB rating in three short series against the Broncos – his odds to win the NFL Comeback Player of the Year actually improved from the last time Bovada pegged him as the favorite.

San Fran is hoping that Garoppolo, the Patriots-backup-turned-star-savior-pivot, can regain the form that had the franchise as the ‘it’ team.

Is he where you should be locking in your CPOY bet?

This start was the first step in a progression that all players coming off major reconstruction surgery need to go through.

It probably didn’t help Garoppolo had to face the Broncos, who have a legit, top-tier defense that can get after the quarterback. Being able to withstand any hits and come away injury-free was probably the most he and the front office was hoping for. Mission accomplished.

It's too early to worry about Jimmy Garoppolo. (@DAonCBS) pic.twitter.com/g300PZnsaM

But Garappolo does has a lot to prove. At the end of 2017, the Niners inked him to what was, at the time, the richest contract for a QB in NFL history: a 5-year, $137.5 million pact with upwards of $74 million guaranteed.

The honeymoon is over now. Jimmy G has yet to surpass six starts in a season, and the return on investment is still pending.

Other Players Worth Watching

Here’s hoping you jumped on Carson Wentz while he was at +1600. He’s now sitting at +1200, as the Eagles look like one of the teams to watch out for in the NFC.

“I don't know many people that are as high on Carson Wentz as I am. I'm about talent at the position and he's the prototype athlete that you'd want. There are not 10 more talented quarterbacks than Wentz.”

Like Garoppolo, staying healthy is the key for Wentz. He was sidelined for an extended period with a back injury last year, after going down with an ACL injury late in the season prior.

The Eagles added more artillery for Wentz this season, with DeSean Jackson returning to loosen up the secondary and rookie Miles Sanders trying to beef up the run game.

Speaking of backs, while Le’Veon Bell rides in second for CPOY betting odds, look just a slot down and Devonta Freeman might be the better  bet at +900. Banged up with knee and groin problems that limited him to just two games and 68 total yards rushing all season, he’s going to be counted on to be the guy that topped 1,000 yards rushing and 11 TD’s in both 2015 and 2106.

The Falcons are shortly removed from a Super Bowl appearance, so they still have the talent to be elite, which makes Freeman more appealing than David Johnson, who’s part of a new leaf turned over in the Desert, and Bell, who won’t have the star-studded Steelers line blocking for him with the Jets.

What’s the Best Bet to Make?

Andrew Luck broke a four-year stretch of non-QBS to win the award last season. Prior to that, six straight QB’s were named CPOY. If you’re looking for a non-pivot, non-offensive player, Earl Thomas (+1600) resurrecting his career in Baltimore and making the Ravens a top-5 defense would be my offer.

But in this QB-centric league, I’m predicting this award stays with the pivots. Strong QB play has always been the fastest path to success in the NFL. Garoppolo is going to be way better than he showed in Week 2 of the preseason, but Wentz is the ticket here.