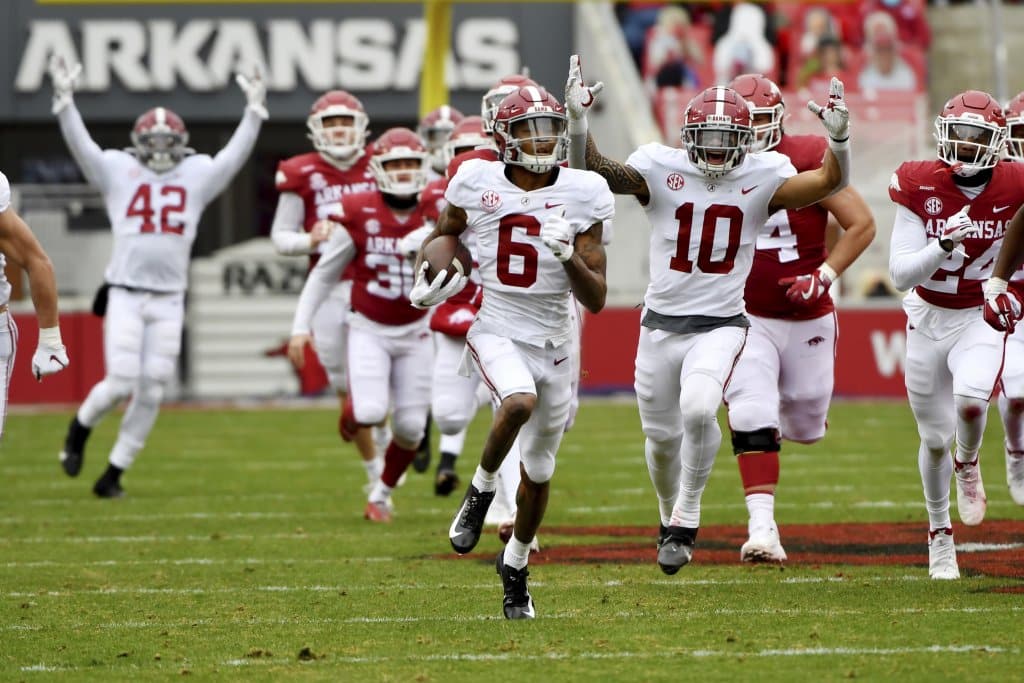 Alabama's DeVonta Smith (6) returns a punt for a touchdown against Arkansas during the first half of an NCAA college football game Saturday, Dec. 12, 2020, in Fayetteville, Ark. DeVonta Smith is The Associated Press college football player of the year, becoming the first wide receiver to win the award since it was established in 1998, Tuesday, Dec. 29, 2020. (AP Photo/Michael Woods)

Heisman Trophy-winner Devonta Smith, his Alabama teammate Mac Jones, and Ohio State quarterback Justin Fields will compete Monday for the NCAA National Championship. Once that’s done, it’s on to the NFL for all three.

Florida QB Kyle Trask saw his season come to a conclusion Dec. 30th when the Gators were whipped 55-20 by the Oklahoma Sooners in the Cotton Bowl. He’s already idling, wondering where he’ll land on NFL Draft Day.

Oddsmakers are also pondering these notions. Prop wagers speculating on where each of these college stars will be called upon to continue their football careers are up at online sportsbooks.

The NFL Draft is slated for April 29th. The Jacksonville Jaguars own the first overall pick and are expected to select Clemson Tigers QB Trevor Lawrence. Then the fun of slotting other talented players with teams begins.

Alabama’s Devonta Smith is the first wide receiver to win the Heisman Trophy since Michigan’s Desmond Howard in 1991. At 6-foot-1 and 175 pounds, there are legitimate concerns among NFL personnel staff as to whether Smith possesses the physical size to succeed as an NFL wideout.

Similar questions were posed about the 5-foot-10, 188-pound Howard prior to his draft year in 1992. Even though Washington opted to ignore them and select Howard fourth overall, he did struggle as an NFLer. Howard caught more than 26 passes just once in nine seasons.

Smith snared 20 TD passes this season to lead the nation. He also topped all of college football in receptions (105) and receiving yards (1,641).

The Cincinnati Bengals are the +250 favorites to select Smith, but will he fall to them at #5? Remember, Cinci selected Clemson WR Tee Higgins 33rd overall last year.

A year ago, the Miami Dolphins ignored the critics and took Alabama QB Tua Tagovailoa fifth overall. This time around, Miami will select Smith third overall, reuniting him with Tua.

READ  Chiefs Open as 9.5-Point Favorites vs Browns in Divisional Round of NFL Playoffs

Fields set a Sugar Bowl record by passing for six touchdowns in his showdown with Lawrence as Ohio State drubbed Clemson 49-28 in the College Football Playoff semi-finals. His ability to beat teams with either his arm or his legs sets Fields up as a QB cut from the same mold as Lamar Jackson, Kyler Murray, and Deshaun Watson.

The New York Jets are the -110 odds-on favorite to select Fields second overall. In this case, the chalk lines up nicely.

Besides Fields, no bigger winner tonight than the Jets. This performance could obviously embolden them to draft Fields at #2 but also opens up legit possibility of a team falling in love w/Fields and parting w/a ton of draft equity to swap w/Jets.

Douglas must be salivating.

The 2-14 Jets will be getting a new head coach after the dismissal of Adam Gase. It would also appear they’re considering moving on from QB Sam Darnold.

Jets GM Joe Douglas was non-committal about their future going forward with Darnold, leaving open the notion that Fields might be in play.

The Las Vegas Raiders are a bit of a surprise as the +450 favorite to choose Trask. They already employ Derek Carr and Marcus Mariota, so QB doesn’t seem to be a pressing need.

A couple of other teams in need of some QB insurance for the future make more sense. Time is running out for Drew Brees in New Orleans, and Taysom Hill doesn’t appear to be the long-term answer.

Perhaps the most logical landing place for Trask, though, is the nation’s capital. Alex Smith is winding down toward the end of his NFL days, and Dwayne Haskins has been cast adrift.

The Washington Football Team needs a QB of the future.

Keeping Up With Jones

Jones many not be the Mac Daddy of NCAA QBs, but his numbers add up nicely. He threw 36 TDs against four picks. At 6-foot-3 and 214 pounds, he’s also equipped with the physical tools.

Alabama has only punted 30 times. pic.twitter.com/rxerYpqNb2

The Colts like those old-school, drop back QBs. Think Johnny Unitas, Peyton Manning and Andrew Luck.

Jones will be the heir apparent to this legacy.