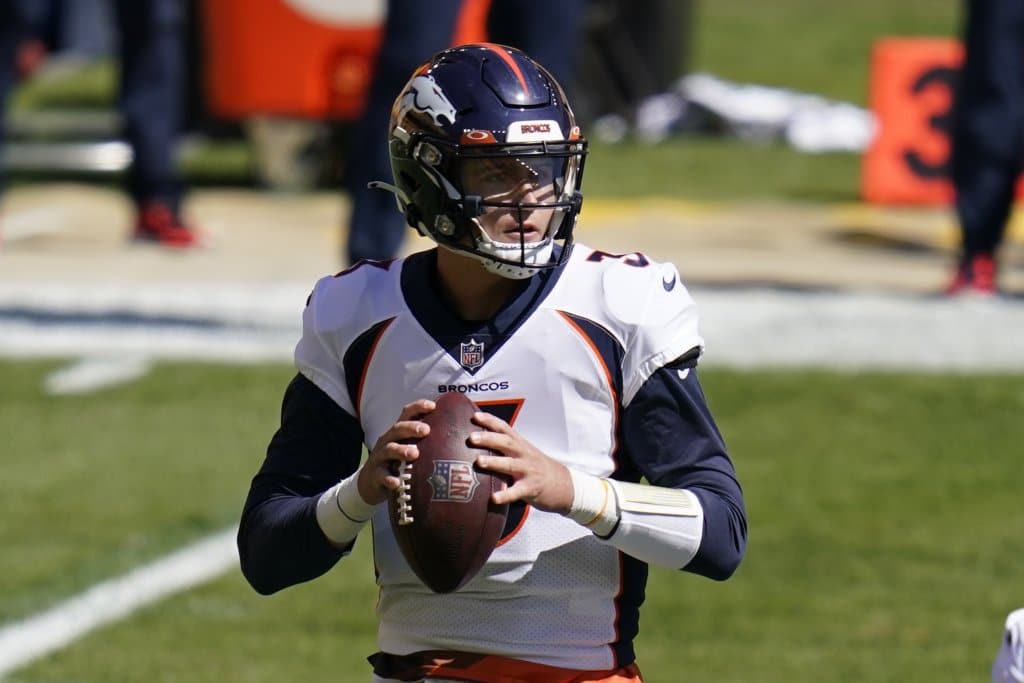 With Drew Lock sidelined by injury, can the Denver Broncos rebound from a disappointing 0-2 start?
Photo by @brgridiron (twitter)

The Denver Broncos and Philadelphia Eagles entered the 2020 NFL season amid high expectations. But after coming up short in each of their first two contests, both these teams have seen their projected win totals tumble at the sportsbooks. And with daunting schedules awaiting them, the Broncos and Eagles face a massive challenge to turn things around.

Winners in four of their final five games to finish last season with a 7-9 SU record, the Broncos looked poised to take the next step this time around. That was reflected on their season-opening win total, where they sported odds as short as -118 to win OVER 7.5 games in the NFL win totals. However, those hopes have been quickly dashed. After turning in an uninspiring performance in their 16-14 season-opening loss to Tennessee, the Broncos were devastated by injuries in last weekend’s 26-21 loss in Pittsburgh.

Broncos’ QB Drew Lock suffered a severe rotator cuff strain and will be sidelined at least two weeks before his injury is re-evaluated again, per source.

Jeff Driskell now slated to be Denver’s starting QB on Sunday vs. Tampa.

In addition to losing quarterback Drew Lock to a shoulder injury that will sideline him for as long as six weeks, the Broncos will be without receiver Courtland Sutton for the remainder of the season after suffering a knee injury in Sunday’s loss to the Steelers. Among the other Broncos expected to miss significant time are linebacker Von Miller, rusher Phillip Lindsay, and cornerbacks A.J. Bouye and Davontae Harris.

Not surprisingly, the Broncos now sport -120 odds to win OVER 5.5 games. But considering their upcoming schedule, even those odds may be too optimistic. Denver returns home to face Tom Brady and the Tampa Bay Buccaneers in Week 3, followed by a Week 4 road date with the New York Jets on Thursday Night Football, and a Week 5 clash in New England. And in addition to six tough AFC West divisional matchups, the Broncos can also look forward to second-half clashes with Buffalo and New Orleans, leaving the team with virtually no margin for error.

Update: Denver is signing former Jags’ and Rams’ QB Blake Bortles to a one-year deal once he passes his COVID protocols, per source.

With Drew Lock out 3-5 weeks, the Broncos almost signed Bortles last year and now will take the next step this year.

Perhaps the biggest indicator of how close this team is to desperation mode are reports they have signed Blake Bortles as insurance under center. Bortles has seen virtually no action since his final dismal campaign in Jacksonville in 2018, and it is tough to see the 28-year-old providing much of an upgrade over backup Jeff Driskell, who was unspectacular but steady after taking over from Lock in Pittsburgh.

While the Broncos have been struck by the injury bug, the Eagles have managed to make their own bed with subpar defensive performances in each of their first two outings. NFC East champions last season, largely by default, the Eagles were expected to at least approach last season’s 9-7 record this time around. The squad opened the season with odds as short as -134 to win OVER 9.0 games and sporting respectable +146 average odds to repeat as divisional champions.

Doug Pederson on giving up eight sacks: “It can’t happen”. Says it’s not just Wentz or the O-line: “It’s a little bit of both.”#PHIvsWAS pic.twitter.com/7ACfWmcVy3

However, Philadelphia looked nothing like a playoff-bound team in a stunning 27-17 loss to Washington in Week 1. The Eagles offensive line provided quarterback Carson Wentz with little help, allowing him to be sacked eight times. Washington also picked off Wentz three times in its first win over Philadelphia since 2016 and embarrassed the Eagles defense while erasing a 17-0 deficit on their way to the win.

FINAL
.
Eagles get embarrassed in Week 2 against the Rams 37-19. There’s so much to say after this game. This defense was atrocious, Wentz was really bad, really bad! Wentz’s stats: 26-43, 242 yards, 0 TDs, 2 interceptions. There are no positives. I’m speechless. #FlyEaglesFly pic.twitter.com/g4lKbZ0im8

Any suggestions that the Eagles’ Week 1 loss was an aberration were buried this past weekend, with a lopsided 37-19 loss to the visiting Los Angeles Rams. Once again, Wentz was victimized by a pair of interceptions, while the Rams offense snuffed out any hopes of a comeback with a dominant second-half performance.

Can Eagles Rebound from Another Dismal Start?

Like the Broncos, a daunting schedule is a concern and has played a huge role in Philadelphia’s win total dipping to 7.5. The Eagles have a golden opportunity to right the ship this weekend against the winless Cincinnati Bengals, but that clash is followed by a tough stretch of five games that features dates with San Francisco, Pittsburgh, Baltimore, and Dallas.

This is the @Eagles schedule for the rest of the season. In other words, I'm busy almost every Sunday until January so please don't ask me to do ANYTHING. pic.twitter.com/qoDmCU63Ek

Of course, hope remains that the Eagles can turn things around. The team marched to a division title after opening last season on a 3-5 SU run and managed to clinch a playoff spot two years ago after opening on a 4-6 run. But with no easy stretches in this year’s schedule, the Eagles offer plenty value as a +115 bet to finish under .500 for the first time since 2016.