Chiefs Open as 9.5-Point Favorites vs Browns in Divisional Round of NFL Playoffs 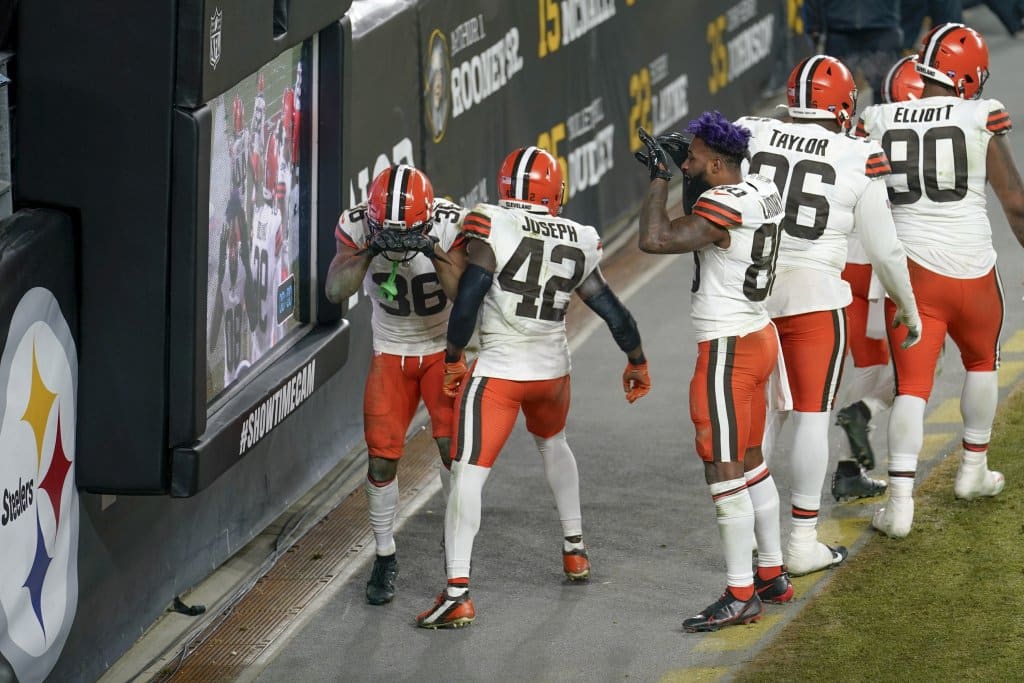 Members of the Cleveland Browns defense celebrate an interception of a pass by Pittsburgh Steelers quarterback Ben Roethlisberger during the second half of an NFL wild-card playoff football game, late Sunday, Jan. 10, 2021, in Pittsburgh. (AP Photo/Keith Srakocic)

Oddsmakers are evidently more impressed by the former accomplishment. Kansas City is opening as the 9.5-point betting choice over the Browns in Sunday’s AFC playoff game. That’s the largest point spread on offer among the four games slated for the NFL Divisional Round.

The Chiefs and Browns will be clashing in the postseason for the first time. Kansas City is an underwhelming 3-4 against the spread as a home favorite this season.

Kickoff at Arrowhead Stadium is slated for 3:05pm ET.

Cleveland didn’t merely go to Pittsburgh and defeat their oldest NFL rivals. The Browns beat the Steelers black and blue.

Cleveland’s 48-37 victory ended a 25-year postseason drought. Playing their first playoff game in 18 years, it was the most points put up by the Browns in the postseason since they whipped the Detroit Lions 56-10 in the 1954 NFL Championship Game.

Browns QB Baker Mayfield passed for 263 yards and three TDs. Balance was the name of the game for the Cleveland offense. Kareem Hunt ran for a pair of TDs. Nick Chubb rambled for 76 yards rushing and caught a TD pass.

Jarvis Landry pulled in 92 yards in receptions, including a TD.

If the Kansas City Chiefs win their Divisional game, they will become the first team in history to host three straight AFC Championship Games.

Both teams coached by … Andy Reid.

The time off has served Kansas City well the past two years. They won and covered in both NFL Divisional playoff games.

Michael Dunn, starting at left guard in place of Joe Bitonio (COVID-19) suffered a calf injury against the Steelers. He’s listed as questionable.

Cleveland right tackle Jack Conklin also left the Pittsburgh game with a leg injury. He’s been bothered by a bad knee and his status going forward is uncertain.

Cleveland is 11-0 this season when winning or tying in the turnover battle. The Chiefs are seeking to join the 2002-04 Philadelphia Eagles as the only NFL teams to host three straight Championship Games. Chiefs coach Andy Reid also coached the 2002-04 Eagles.

The Browns are now 11-0 when they win or tie the turnover battle this season.

With this line opening at such a wide margin, it’s difficult to imagine it could lengthen much further in favor of Kansas City. Maybe another half-point, but not much more than that.