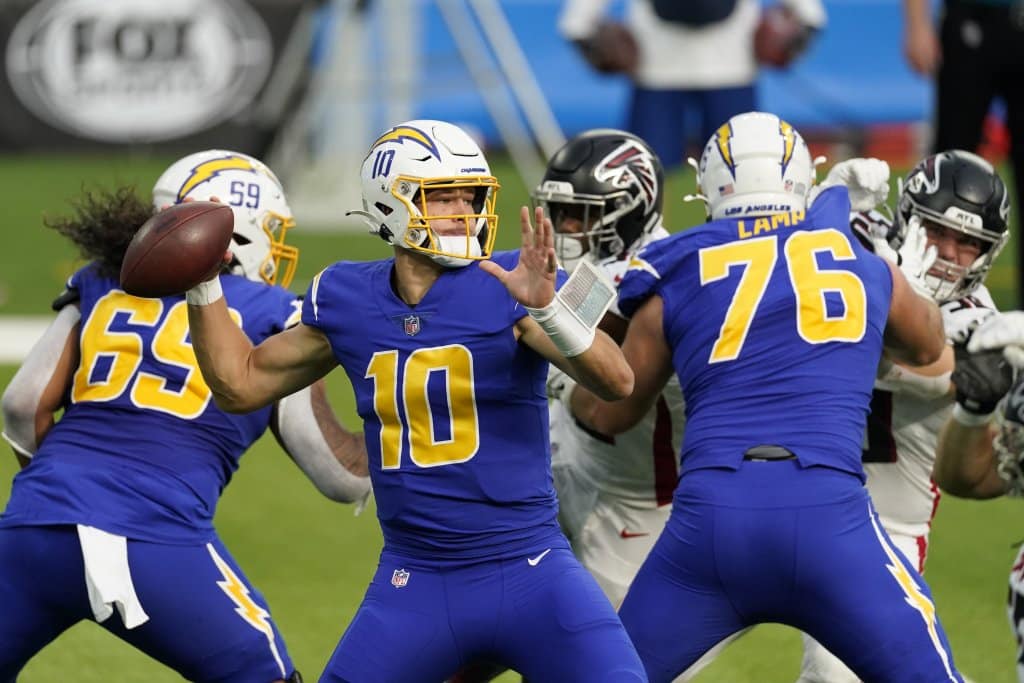 Thanks, Cooper Kupp. Without the Rams receiver finding paydirt, we’d be singing a sorry tune this week. Instead, we salvaged some precious earnings, allowing us to pick free and easy in Week 15.

And it should be a good one, with the Las Vegas Raiders desperately needing a win to stay in the playoff picture, while the Los Angeles Chargers want nothing more than to drive a stake in the hopes of their AFC West rival.

They’re expecting it to be clear a 60 degrees from Allegiant Stadium in the desert. Check the betting lines here, but let’s add more intrigue with some player prop selections.

Odds taken on December 16 from DraftKings, FanDuel, and BetMGM

The Chargers love to throw the football. Through 13 games, the Bolts have attempted the most passes (531) and are tied for the most completions with the Steelers (348). And the Raiders present a prime opportunity to cash in with rookie slinger Justin Herbert at the helm.

When Justin Herbert gets a competent coaching staff….whew.pic.twitter.com/hBFZu9XVkv

Vegas is 25th in passing yards surrendered per game, and they rank 31st in the league with just 15 sacks in 13 games. That should provide clean pockets and plenty of time for Herbert to pick apart the Raider defense.

He’s gone over the completion line set for him in this one in four straight games and in seven of his last eight starts. After back-to-back tough starts against the Bills and Patriots, he threw for two scores last time out against Atlanta — that’s eight of his last 10 outings with at least two TD tosses.

One of those games was against these very Raiders in Week 9: 28-for-42 for 326 yards and two TD passes. The beat should go on in a shootout.

It’s hard to imagine Darren Waller flying under the radar, but such is the life when you play in the same division as Travis Kelce on the supersonic Chiefs. Waller has 84 receptions on the campaign, and is grooving in one of the best four-game volume stretches in his career. Over that span, he’s been targeted 41 times for 34 catches, 386 yards and three touchdowns.

Darren Waller is EATING in the first half:

In their Week 9 matchup, Waller was targeted 10 times, coming down with five receptions. Expect him to again figure prominently against LA. He’s also gone over 72 yards receiving in seven of his last nine home games.

On the other side, Keenan Allen has been a target monster for the Chargers all season, and with his first catch Thursday, will have broken the 100-reception plateau for the third time in four seasons.

Players this season with at least 90 rec and 5 rec TD:

The safe pick is Raiders’ running back Josh Jacobs, who seems to thrive in primetime. He has punched it into the endzone in four of Vegas’ last five night games. Ditto Allen, who is quite the road show, scoring a touchdown in each of his last four away games.

Nothing like a Justin Herbert to Keenan Allen TD 🔥@NFL | #BoltUp pic.twitter.com/i4rUwV30H9

But there’s some value bets worth considering here: Nelson Agholor has connected on touchdowns in four of his last five home games, while Chargers’ tight end Hunter Henry has his own little TNF streak running. He has TD’s on three straight Thursday appearances.