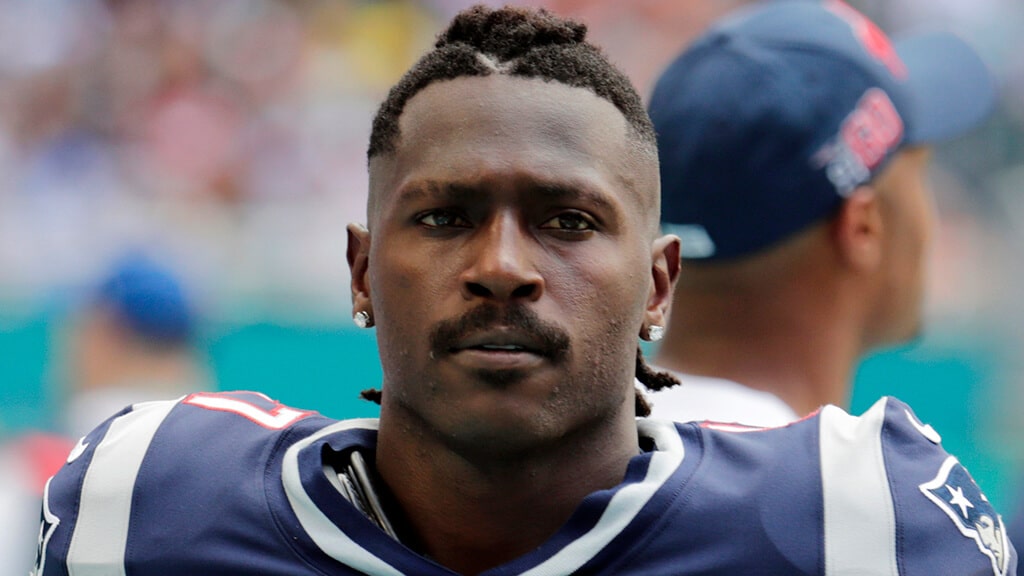 Antonio Brown caught four passes for 56 yards and a touchdown in his lone game as Tom Brady's teammate in New England. Photo by @AroundTheNFL (Twitter).

Antonio Brown is back. The troubled wide receiver is the newest member of the Tampa Bay Buccaneers, reuniting with Tom Brady. The duo spent a small portion of the 2019 season together, but apparently that was enough for Brady to make a strong push to the Bucs to sign AB.

Breaking: Antonio Brown is joining Tom Brady in Tampa Bay as the WR has reached a 1-year deal with the Buccaneers.

Brown’s arrival not only bolsters Tampa Bay’s wide receiver corps, but their championship prospects as well according to online sportsbooks.

Prior to the news, the Bucs’ Super Bowl odds were +1300, but that number is ancient history. Tampa Bay is now +1000 to win it all, trailing only Seattle, Baltimore and Kansas City.

The Bucs are All-In

Brown is the latest former star to land in the Sunshine state, joining Brady, Rob Gronkowski, LeSean McCoy and Leonard Fournette. There was heavy interest around the league in acquiring his services, as the Seahawks, Ravens and Packers were among the teams with better odds than the Buccaneers to sign him.

*Antonio Brown and the Buccaneers are working towards an agreement* pic.twitter.com/NSR400o8jM

The Bucs are clearly in win now mode with so many high profile veterans on the roster, and are reportedly being dubbed a “one-year team” by other executives around the league.

Perhaps that’s just sour grapes, but regardless Brady now has arguably the NFC’s best set of receiving weapons at his disposal. Chris Godwin and Mike Evans are alpha wideouts, and Rob Gronkowski proved in last week’s blowout victory over Green Bay that he still has something left in the tank.

Rob Gronkowski gets his first TD as a Buccaneer. Just like old times for Brady and Gronk.pic.twitter.com/hY2VyAVa22

Now they add Brown into the mix, who since entering the league in 2010 is Pro Football Focus’ second highest graded wide receiver. You can’t double-team everyone, meaning Brady is going to be picking defenses apart moving forward.

Brady and Brown may have only played one game together, but their practice sessions in New England were reportedly legendary.

Brady has been infatuated with Brown in part because of how dominant the WR was in Patriots practice. Prior to the Miami game, AB and Brady connected so many times in practice, I was told that coaches asked Brady to stop throwing to him deep. https://t.co/I9UyBgXJnj

They were certainly on the same page in their lone outing together in Miami, as Brady targetted AB on eight of the 14 routes he ran (57%), connecting for 56 yards and a touchdown.

The last time Antonio Brown was on a football field, he caught this TD pass from Tom Brady ???? pic.twitter.com/svngQ2l4FQ

Brown hasn’t played since that Week 2 game last season, but one look at his social media channels and it’s clear he’s still in pristine shape. He must first pass his COVID-19 protocol tests, but assuming no hiccups he’ll be eligible to join the Bucs once his 8-game suspension is up in Week 9.

Is the Juice Worth the Squeeze?

Brown brings a litany of off-field issues with him to Tampa Bay. He’s had countless run-ins with the teammates and the law, and has been accused of committing some absolutely vile acts.

Obviously the NFL has determined he’s paid for his wrong doings, but you have to wonder if everyone in the Bucs organization is on board with the decision. Check out this quote from head coach Bruce Arians, who was with AB in Pittsburgh for two seasons.

Bruce Arians in March 2020 on Antonio Brown coming to Tampa:

I just know him, and — it's not a fit in our locker room.

Clearly, Arians didn’t want Brown at the time, but maybe his mind has changed after seeing how close this Buccaneers team is to being elite. Regardless, you have to assume AB will be on his best behaviour knowing this is likely his final opportunity to prolong his NFL career.

Buy the Bucs Because of their Defense, Not AB

Tampa Bay was already the number one team by DVOA prior to the Brown signing. Yes, he upgrades the offense, but Brady’s unit was already averaging 29.2 points per game without him.

The real reason to be bullish on the Bucs is their defense. According to PFF, they boast the league’s top coverage unit, the third best pass rush, and a top-12 run defense. The Chicago Bears and Denver Broncos are the only other teams to rank that high in those three categories, but their respective offenses pail in comparison to Tampa Bay’s, with or without Brown.

The Bucs put the entire league on notice in Week 6, manhandling the previously undefeated Packers. They held the league’s highest scoring team to 10 points, and the league’s top graded passer to 160 yards.

The @Buccaneers pick up a huge win over the Packers. pic.twitter.com/vi86xxN1JC

That’s the kind of effort it will take to dethrone the Kansas City Chiefs, and that’s why Tampa Bay still offers value at +1000.