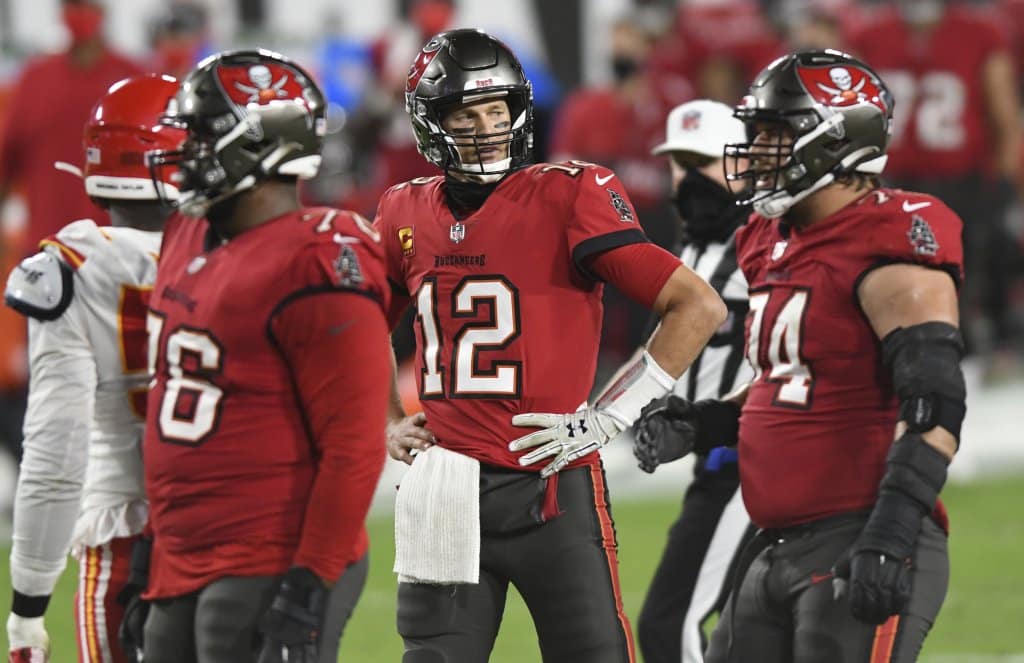 Tampa Bay’s bet on Tom Brady seems to have hit a snag after back-to-back losses over the last two weeks.

Following a 27-24 defeat to the LA Rams at home last Monday night, the Buccaneers suffered a second consecutive loss by the same score in Tampa against Kansas City on Sunday. Coming into today, the Bucs were just over +1000 to win Super Bowl 55 on most books, but their Super Bowl odds moved to +1400 on Sunday night.

Odds taken from FanDuel on Nov. 29

The Chiefs got off to a jet-fueled start and Brady threw two interceptions in the first half en route to a 20-10 Kansas City lead at halftime.

Patrick Mahomes had more than 300 yards passing in the first half and finished with 462 and three touchdowns in the game. Tyreek Hill scorched the Bucs on defense; he caught each of Mahomes’ touchdown passes as part of a 13-reception, 269-yard performance.

Brady still finished with 345 yards passing and three touchdowns, but his two picks came on consecutive possessions and Kansas City scored a touchdown after nabbing the second one.

#tyrekehill throws up the peace sign and takes it 75-yards to the endzone #ChiefsKingdom pic.twitter.com/dplijBeJi8

Although Tampa Bay’s defensive line often created pressure off the snap, Mahomes’ escapability was often the difference in creating the opportunity needed to make a big pass. The Bucs simply could not cover Hill one-on-one, and the Chiefs waited for them to commit a second defensive back to him in coverage to hit tight end Travis Kelce underneath.

The Bucs’ bread and butter on defense is stopping the run. Now, a bit of a trend is emerging, where teams that don’t focus on establishing a strong ground attack find success against Tampa Bay.

Outside of their first two games in November against the Giants and Saints, Tampa Bay hadn’t otherwise allowed more than 100 yards rushing this season. The Bucs have now lost three of their last four games, and in each of those losses, opponents have thrown for more than 280 yards and passed the ball 64% of the time on offense.

For the season, Brady falls within the league average-or-better on downfield passes along the sidelines. However, in the last two games, he’s only completed 8-of-23 passes with one touchdown and two interceptions on passes of more than 10 yards outside the hashes. Brady wants to stay in the pocket and get the ball out of his hands quickly. When it’s come to those longer throws down the sideline, he appears to be leading with anticipation rather than opportunity.

READ  Chiefs Open as 9.5-Point Favorites vs Browns in Divisional Round of NFL Playoffs

At this point, if the Bucs are still a bettor’s choice to win the Super Bowl, that decision was made well before this week. Right now, there is still a plausible scenario in which Tampa Bay doesn’t even advance to the playoffs, in large part, due to the likelihood of three teams coming out of the NFC West.

New Orleans has already won both division games against Tampa Bay this season and should win at least two of its next three before Drew Brees’ potential return. With a game in hand, Arizona is a half-game ahead of Tampa Bay in a conference wins tiebreaker.

The Bucs have lost three consecutive games at home and host the improved Minnesota Vikings at Raymond James Stadium next week.

The Rams followed a similar script to the Chiefs when it came to exposing the flaws in the Bucs’ defense, and Aaron Rodgers isn’t going to miss a chance to do the same in a potential postseason matchup. The Bucs have succeeded this season in improving their team with veterans that were markedly better than the talent that they had last year, but they don’t have the horses to keep up with more realistic Super Bowl contenders this year.

Nick Krueger has over a decade of experience in sports media, covering a wide range of events including two Olympic Games for Yahoo Sports. Other areas of focus for Nick throughout his career have included college football recruiting, NCAA athletics and Major League Baseball Spring Training.

Nick Krueger has over a decade of experience in sports media, covering a wide range of events including two Olympic Games for Yahoo Sports. Other areas of focus for Nick throughout his career have included college football recruiting, NCAA athletics and Major League Baseball Spring Training.