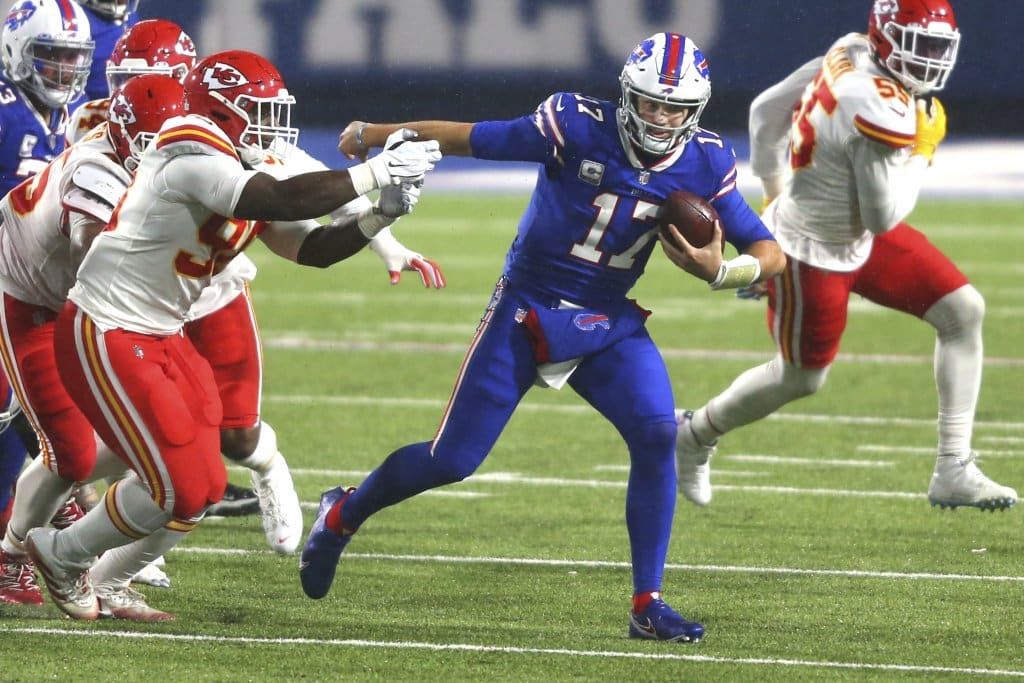 The rubber match in terms of title tilts is Sunday at Arrowhead Stadium. The Chiefs, who beat the Bills 26-17 in Week 6 of the NFL regular season at Buffalo, are 3.5-point home favorites. The betting line moved from Kansas City -3 on Friday when news broke that KC quarterback Patrick Mahomes was out of concussion protocol and cleared to play.

Kickoff for Sunday’s game is 6:40pm EST. Check out the updated injury reports, as well as other betting options prior to kickoff, but let’s start with the lines for player props.

During their regular-season victory over the Bills, the Chiefs defense held Buffalo quarterback Josh Allen in check. He was limited to a season-low 14 completions and 122 passing yards.

That game was played in a downpour, so maybe don’t put all your eggs into that basket. Still, Allen has gone over 26.5 completions just twice in his last six games and only three times through the last eight games.

Steve Spagnuolo’s defense will use late movement & disguise vs. QB Josh Allen — with Tyrann Mathieu as the robber safety.

Here’s an example — with KC spinning the secondary late to close the middle of the field. #Chiefs #Bills @gregcosell @NFLFilms pic.twitter.com/p0tKNkl4dW

In those three games, the Bills scored 34 (San Francisco 49ers), 38 (New England Patriots) and 48 (Denver Broncos) points against non-playoff teams with losing records. Hard to imagine he’ll go off like that against the reigning Super Bowl champions.

Prop #2: Kelce Will Tight End Up

Kansas City tight end Travis Kelce is a machine when it comes to putting up numbers. He’s gone over 100 yards in receptions six times through his last nine games. In one of the games where he came up short of the century mark, Kelce finished with 98 yards.

Travis Kelce is ready for the playoff game 😂

Mahomes loves to go to Kelce when he needs a big play. He’s targeted his big tight end at least 10 times in eight of his past nine games. Kelce pulled in a minimum of eight catches in eight of those nine games, finishing with seven in the other contest.

Who Are the Best Bets to Score a Touchdown?

Kelce has also found the end zone in each of his last five games. He’s scored KC’s first TD of the game four times this season. That includes an 11-yard scoring reception for the first TD in the Chiefs’ Week 6 win over the Bills.

Wide receiver Stefon Diggs set Bills marks this season with NFL-leading numbers for receptions (127) and receiving yardage (1,535). He’s scored five TDs in his last four games, and has a TD catch to his credit in each of his last three postseason games.