Home NFL Betting Sites All the Chiefs and Buccaneers Team Props You Can Bet for Super Bowl 55
1. 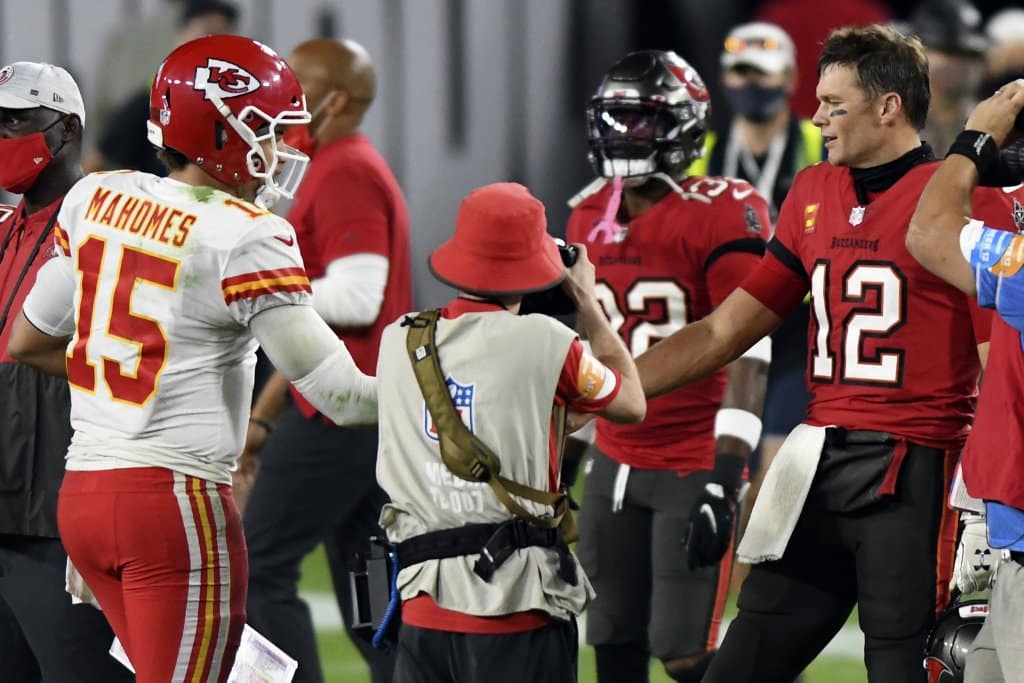 Tampa Bay Buccaneers quarterback Tom Brady (12) congratulates Kansas City Chiefs quarterback Patrick Mahomes (15) after their NFL football game in Tampa, Fla. The Super Bowl matchup features the most accomplished quarterback ever to play the game who is still thriving at age 43 in Brady against the young gun who is rewriting record books at age 25. (AP Photo/Jason Behnken, File)

No matter how weird this COVID crossed 2020 NFL season looked — from the foggy face shields to scout team wide receivers playing QB —it’s hard to argue with the end result. In fact, this might be the most exciting big game matchup ever.

The Kansas City Chiefs are favored by three over the Tampa Bay Buccaneers in Super Bowl 55, and there’s something for everyone in this game.

Were you tired of Tom Brady and the Patriots playing every February? Well, problem mostly solved! Now, the GOAT takes on Patrick Mahomes, the face of the NFL and the player best poised to one day steal Brady’s crown. We also have a matchup of two of the best tight ends of all-time in Rob Gronkowski and Travis Kelce. For extra fun, lets throw in two of the most aggressive and silly dressed coaches in the NFL. Also, the Buccaneers are playing a Super Bowl at home!

There’s so much to talk about with this game, but today, we’re focusing on scoring props, first down props, kicking props, and turnover props. Here are the plays we like in some of those categories.

The first thing that jumped out to me in these scoring props is how high the Chiefs’ total yardage of TDs is. If they’re only expected to score 3.5 touchdowns in the game, that means the average length of each endzone trip needs to be almost 20 yards. Sure, the Chiefs have the most electric offense in the game, but that number is way too high.

For perspective, Kansas City has topped 30 points in all six playoff games that Patrick Mahomes has started and finished: their total touchdown yardage has exceeded 66.5 only once. Those other games weren’t even close. That 51-point explosion against Houston? Those seven TDs amassed just 47 total yards.

It’s likely this game’s number is so high because the performance Tyreek Hill had against the Buccaneers defense is still fresh in everyone’s minds.

When the @Chiefs faced the Bucs earlier this season, @cheetah put up one of the most ABSURD quarters we’ve ever seen: 7 REC, 203 YDS, 2 TD. pic.twitter.com/dmxezGOFC8

Realistically, Todd Bowles is too good of a defensive coordinator to allow Hill to shred his team like that again. Most of KC’s opponents have just resigned themselves to dropping into deep zones and making the Chiefs work underneath; which they’re also great at.

Ultimately, the Chiefs’ offense should still have themselves a day. But I don’t expect many home runs against Tampa in this rematch.

Along that line of thinking, the Buccaneers have a good shot to have that longest score of the game. Kansas City has a solid secondary that can hold their own one on one. But they do like to take gambles, and if they aren’t careful, old man Brady can still burn them deep.

BRADY TO SCOTTY MILLER TD TO END THE HALF 🤯

In a game that will probably see Tampa throwing to catch up, the odds of one of their talented receivers breaking away for a sizable score seems pretty good.

Since I’m also expecting the Chiefs to have to convert in the red zone rather than score from outside then I think there’s some value on their first TD to come on the ground. After all, you’d be hard pressed to find a more creative play-caller down around the goal line than Andy Reid.

No one has more fun in the red zone than the Chiefs 🔥 @PatrickMahomes @tkelce @cheetah @Demarcus @Chiefs pic.twitter.com/mmHKTEQvvV

Depending on his play design, you could get burned by one of those little touch passes or flipped balls counting as a passing TD, but at almost two to one odds, I think it’s worth a roll. Don’t forget, Mahomes could just punch it in himself, the same way he started off Super Bowl 54.

Come After The King, You Best Not Punt

It was tough to pinpoint any one area to criticize the Buffalo Bills after they were so thoroughly dismantled by Kansas City in AFC Championship. But the decision by Sean McDermott to kick field goals on several 4th and short situations drew the ire of everybody across football.

McDermott's field goals were worse than the LaFleur field goal

Even the most conservative of coaches know they aren’t going to beat the Chiefs kicking field goals. And Bruce Arians is anything but conservative. The Bucs attempting a 4th down conversion is a near certainty. The odds of them converting are also pretty good, as long as their quarterback remembers it’s a do-or-die down.

Tom Brady thought it was 3rd down after a 4th down incompletion ended the game for Tampa Bay. pic.twitter.com/YF25w3rU3Y

The Butker Did It

Kickers are a lot like goalies in hockey: it’s best not to try to get inside their heads. All you need to know for this prop is that Harrison Butker is the second-most accurate kicker in NFL history… as long as you aren’t counting extra points. He seems to have a bit of a mental block when it comes to kicking from 33 yards out. From everywhere else though, he’s money.

HARRISON BUTKER FOR THE WIN… FROM 58 YARDS! #ChiefsKingdom #KCvsLAC pic.twitter.com/7y4KmCEEiA

His counterpart, Ryan Succop, has hit just one 50-yard field goal in the last two years.

The Chiefs can’t score touchdowns on every possession. Take their special teamer to make at least one special play.

The Super Bowl is never a cleanly played game. Don’t put too much stock into the poise of Mahomes and Brady or how the Chiefs and Bucs finished near the top of the league in fewest giveaways with 16 and 17 respectively. This is the game’s biggest stage, and the guys on defense want to make their mark too.

You saw it last year when the Chiefs and 49ers each had two takeaways in Miami. You saw it last week in Green Bay when Brady was picked off three times in the second half.

When taking the Bucs for longest TD, I mentioned those gambles that Tyrann Mathieu and company make in the Chiefs secondary. But the reason they’re given the freedom to do so is that it works, a lot!

Mayfield trying to make a play on third and long. Great eyes by Tyrann Mathieu. pic.twitter.com/V22Eb22sWc

The Super Bowl is an old hat for Brady by now, but for most of his teammates: this is their very first taste of football’s ultimate stage. Which means jitters. You’ve seen the dropitis Chris Godwin and Mike Evans have been battling for stretches this postseason: a tipped ball pick or a fumble early in the game would not be shocking out of them.

Chris Godwin has 223 Rec Yds in the 2020 playoffs, the most ever by a Buccaneers player in a single postseason.

Godwin also has 6 drops in the playoffs, the most by ANY player in a single postseason since ESPN began tracking in 2006. Godwin had 1 drop in the regular season. pic.twitter.com/YZX17DXFgw

On the other side, the Bucs front four should be able to get into Mahomes face at least a few times over the course of the night with both of KC’s starting tackles out for this game. Consider taking both overs here; you need only one to hit to come out ahead.