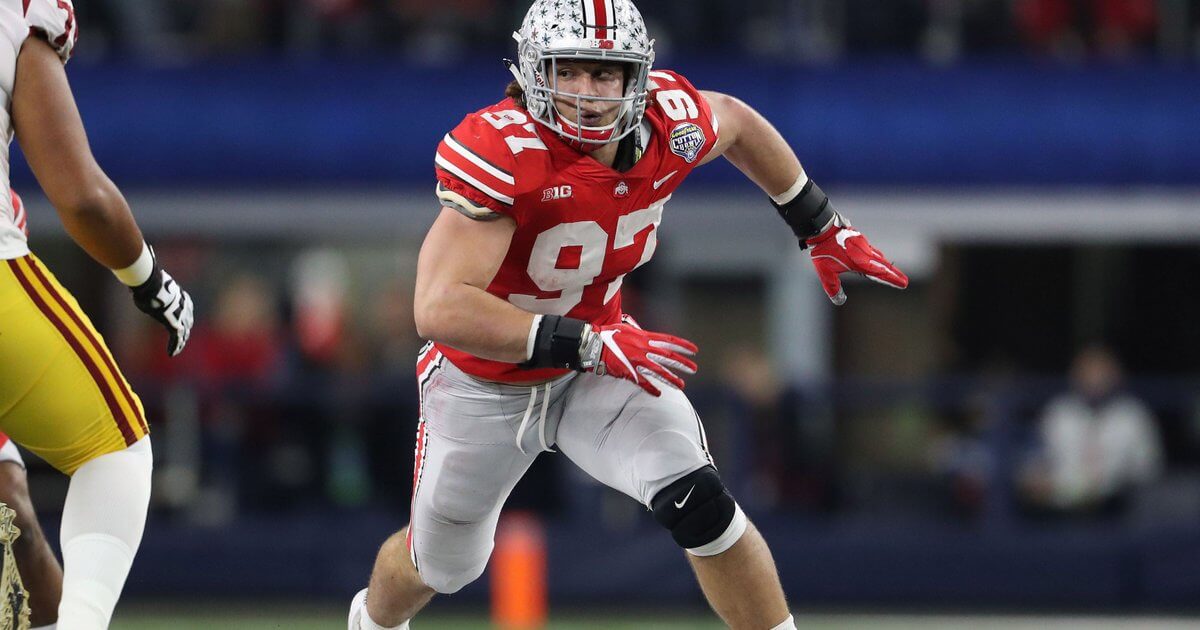 Defensive End Nick Bosa is the odds-on favorite to be selected first-overall at the 2019 NFL Draft. Photo from @timringTV (Twitter)

Ohio State Buckeyes Defensive End Nick Bosa is a heavy favorite to be the first player called to the stage by Roger Goodell at the upcoming 2019 NFL Draft.

That’s not to suggest there aren’t some other quality contenders on the list of players provided by BetOnline in the latest odds.

Odds to be Selected 1st Overall at 2019 NFL Draft

Nick Bosa has been projected to be the top pick for some time now, so it’s not surprise to see the defensive end as a clear favorite to go number 1.

There may be value in the other players, but here’s the case to fade those picks and to take the big favorite.

The Arizona Cardinals own the number 1 selection thanks to their 3-13 last season. Most years teams at the top eye an answer at the most important position, but you can cross off Kyler Murray and Bosa’s teammate at Ohio State Dwayne Haskins, because the Cardinals drafted their franchise QB last year.

Josh Rosen played in 14 games and, while he wasn’t spectacular, the franchise won’t bail on him after just one season.

New Head Coach Kliff Kingsbury is going to want a chance to groom Rosen and will likely look to add on the defensive side of the ball, believing his coaching skill and picks later in the draft will be enough to turn around the offense.

Larry Fitzgerald Praises Kliff Kingsbury But Says He Might Not Return to Cardinals https://t.co/UkvX3JFgt3

The Cardinals allowed 425 points last year which ranked 26th in the league. No playoff teams ranked below them, making it pretty glaring that an improvement is needed on defense in order for Arizona to contend for the postseason and eventually a Super Bowl.

Nick Bosa is the Real Deal

When Bosa arrived at Ohio State, the rumors were he may be better than his older brother Joey Bosa. It was tough to believe he could be better with Joey being picked third overall by the Chargers, not really leave much room for error.

Well, Bosa exceeded expectations and here he is about to cash in on all that promise.

He recorded 12 sacks as a freshman in 2016 and followed that up with 15 more in 2017. His run was cut short this year after suffering a core muscle injury that took him off the field for an extended period of time, before ultimately deciding it was in his best interest to prep for the draft.

The injury isn’t something that will linger and is not posing any problem for the Cardinals or any other team with Bosa on their draft board. He is a monster talent, from a family that has already provided the league with a superstar pass-rusher and that’s all NFL front offices care about.

Two Buckeyes are among those with the four-best odds to be the first pick in the NFL Draft.

Is There Value in Fading Bosa?

There are some intriguing options for the Cardinals outside of Bosa and there is one other wager you could consider from BetOnline.

You don’t even need to get specific to get plus money here. The field is paying +150, so if you think the Cardinals will go for an offensive player, someone else on defense or trade the pick to a QB-needy team (we’re looking at you, Giants) this option is providing value.

Final Verdict: Bosa is Headed to the Arizona Cardinals

As intriguing as other options may be, sometimes logic is what matters most in these situations.

The Cardinals need a defensive star and there is the perfect one staring them right in the face at number 1.  There will be movers, shakers, and shockers at the draft, but not with this pick. Arizona will go chalk, and take the Buckeyes defensive end with the top selection.