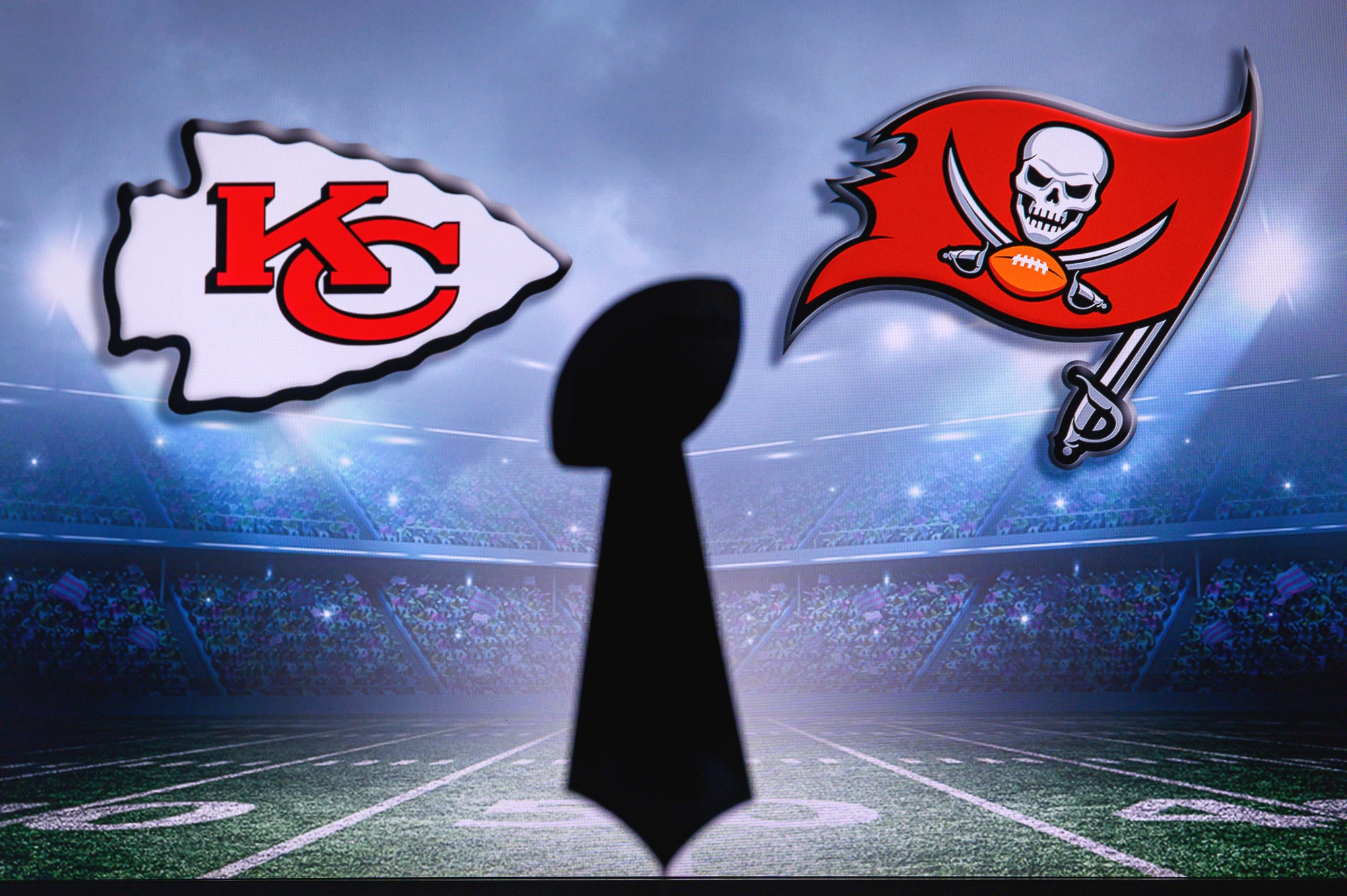 As we prepare ourselves for the biggest game during the 2020 NFL season, we look ahead at the two teams facing off against one another in the Super Bowl. The Kansas City Chiefs will be taking on the Tampa Bay Buccaneers in Tampa Bay for what will be a fantastic game all around. But who has the upper hand in this game? Let’s start breaking it down by positions to find out!

This is the premier position in the NFL and these two players are the reasons that their teams are in this game. The Kansas City Chiefs have a generational talent at this position in Patrick Mahomes, he is one of the best players that this league has seen in a long time.

His accuracy and ability to extend plays has become a trademark for him in only four seasons. In those seasons, he has started three of them and reached the Super Bowl twice and the AFC Championship game the other time.

On the other side of this you have Tom Brady on the Tampa Bay Buccaneers, arguably the greatest quarterback to ever play the game. He will be looking for his SEVENTH Super Bowl ring in this matchup but will have to get past a guy that may be taking the throne for best quarterback in the league once Brady chooses to retire.

It will be a fantastic game between these two guys as their last matchup was earlier in this season where Mahomes and company were able to get the best of Brady, but this is a far different Tampa Bay team than before. These two guys are sure to stuff the stat sheet in this matchup.

This is a pretty interesting position as neither of these teams rely on their rushing attack that much. For the Chiefs, they have rookie sensation Clyde Edwards Helaire taking the majority of the carries while former all-pro back Le’Veon Bell comes in for a change of pace.

The two of them haven’t shared the field that much together with one of them almost always being injured but they will both be suiting up for this upcoming game. If the Chiefs are able to establish a strong rushing attack with these two guys, then the Buccaneers could be in for a very long night defensively.

As for Tampa Bay, they have Leonard Fournette and Ronald Jones. I have still not heard if Jones will be able to get on the field for this game due to a lingering quad issue that has held him out for quite some time. That would mean Fournette would pick up the bulk of the carries once more as he has dominated so far in this postseason.

He seems to be fully embracing his role of a work horse back and has been improving at catching the ball out of the backfield as well, making him an all-around player at the position. The same goes for the Buccaneers as well, if they can get some push early on and establish their own dominant rushing attack then they could be off for a big offensive performance.

Similar to every position so far, this one is an incredible tight race. The Chiefs have the luxury of wildly fast pass catchers in Mecole Hardman and Tyreek Hill, with either of them posing a threat to explode for a big gain on any given play.

Hill was able to dust the Buccaneers in their regular season matchup, picking up 203 receiving yards and two touchdowns in the first quarter alone! But the Buccaneers are confident in what they bring to the position as well, with an outstanding trio of receivers in Mike Evans Chris Godwin and former all-pro Antonio Brown not to mention Scotty Miller.

Those guys have given opposing defenses nightmares before the games due to how diverse and talented they are all over the field especially with Brady throwing them the football. This position could go either way here but the Buccaneers may have the edge with the amount of talent they have overall.

Without a doubt, the Chiefs have the upper hand here. They have the best tight end in the league in Travis Kelce, it doesn’t seem like there is anybody out there that can cover him.

He was actually in the top five receiving yards leaders by the end of the season, picking up around 100 yards almost every single week. Including a 100 yard and two touchdown performance in his last game against the Buffalo Bills in the AFC Championship.

Meanwhile, the Buccaneers have Rob Gronkowski, who has been solid for them this year but is nowhere close to the player that he was a few years ago before his retirement. He isn’t as fast or physical down the field but has been great while run blocking.

But regardless, Kelce is completely unguardable and has officially taken the throne as the best tight end in football, he could be primed for a giant day in this matchup!

The Chiefs suffered a ginormous blow to their offensive line in their AFC Championship game, with their starting tackle Eric Fisher being ruled out for the remainder of the season with a knee injury that he suffered during the game.

Without Fisher in the lineup, the Chiefs are going to have to get their backup up to speed on the game plan as Mahomes needs to be given time to pass the football like any other quarterback.

The rest of their offensive line hasn’t been among the best in the league, but they are definitely an above average group that is able to protect Mahomes well along with helping to get a run game going.

For the Buccaneers, they have one of the better offensive liens in the NFL this season. Their group should be fully healthy entering this contest while playing their best football lately.

Stuffing the New Orleans Saints defensive line in the Divisional Round while doing the same once again against the Green Bay Packers in the NFC Championship.

Both of these units know that they have to win the battle of the trenches if they want any offensive success in the biggest game of football in their careers, it is yet to be known which of these groups will come well enough prepared to win that fight.

Finally flipping over to the defensive side of the football and we have a very strong matchup.

The Chiefs have a few dynamic players on their line in Chris Jones and Frank Clark, each of them causing havoc on opposing offensive lines in both the pass game and the rush game. They have been great together all season long and have shown no signs of slowing down heading into this game, especially with them both being fully healthy.

For the Buccaneers, they have a number of strong players on their defensive line that has contributed to their number one overall rushing defense in the league. Vita Vea, Shaq Barrett, Jason Pierre Paul and a few others in their rotation have been outstanding this season.

There are very few teams that would be able to generate consistent success in the run game against this defensive line and they are always a threat to attack the quarterback in passing situations. Sacking Aaron Rodgers 10 times in two games this season, which is even more surprising when you realize that the Packers have only allowed 25 sacks all season long.

I would definitely keep an eye on these two units.

These guys will definitely impact the course of the game as the Buccaneers linebackers have been a giant reason for their success throughout the offseason.

They have the veteran linebacker Lavonte David, who is good in virtually every situation as well as leadership. He is alongside the young Devin White, one of the fastest linebackers in the league who has been able to force interceptions and fumbles all season long and could be proving himself to be a top linebacker in the league.

The Chiefs are less fortunate at the position with Anthony Hitchens being the most notable name on their roster here. They have overall been really solid, but this unit isn’t anything to brag about, they have just done a fantastic job of limiting their mistakes and making strong tackles in open space.

Yet another position that goes either direction as the Buccaneers have Carlton Davis and Jamal Dean. Davis has been outstanding in the postseason so far and has specifically done a great job on the Saints receiver Michael Thomas, limiting him to only three catches in three different contests, including a goose egg in their Divisional Round matchup.

They have been steadily improving all season long and are peaking at the perfect time. They could be ready to make some plays come Sunday. The Chiefs have also been improving this whole year at this position, with two very young corners in L’Jarius Sneed and Chavarious Ward.

These two guys had their fair share of struggles like the rest of the players in this preview but have put together a few outstanding performances in the last few weeks, possibly preparing us for a giant game in the biggest stage possible.

The Chiefs are the beneficiaries of having both Daniel Sorenson and Tyrann Mathieu, an excellent combination of two veteran players that are intelligent and great tacklers. They each have made big plays for this football team throughout the season and have been big reasons for their success.

They don’t allow the big play down the field as they also do a terrific job of communicating the defense to the other players on the roster.

Now factor in their leadership to the younger guys on their defense and you have a fantastic duo of safeties that can win you a football game. For the Buccaneers, they have the rookie Antoine Winfield and Jordan Whitehead.

These are two very fast playmakers on the defensive side of the football with Winfield doing a great job of making huge impactful plays for their offense to capitalize off of. Whitehead has been less efficient but still a solid player all around that could come up with a few big plays throughout the course of the ball game.

Each of these teams have overcome countless obstacles to get them to this point and neither organization is looking to fall back now. This will be a very close game throughout the entire contest so don’t expect a blowout for either side. They have already matched up with one another earlier in the season and it ended up being a one score game so expect yet another close game as I just mentioned.

While Tom Brady has been incredible all postseason and his team has been clicking at every level, I just can’t bring myself to pick against Patrick Mahomes and this Chiefs teams.

They have been so dominant all season long and have far too many weapons for this inconsistent Tampa Bay defense to handle.

At the end of the day, it will come down to Brady and Mahomes and as of right now it would be smart to roll with Mahomes in this game. Although it is never smart to bet against Brady either. We are in for a great game this weekend so buckle up!

There are a number of interesting prop bets to choose from in this contest but here are the most notable ones so far:

See all the best Prop bets at BetOnline by visiting the site below and collect up to $1000 Bonus when you make a deposit.